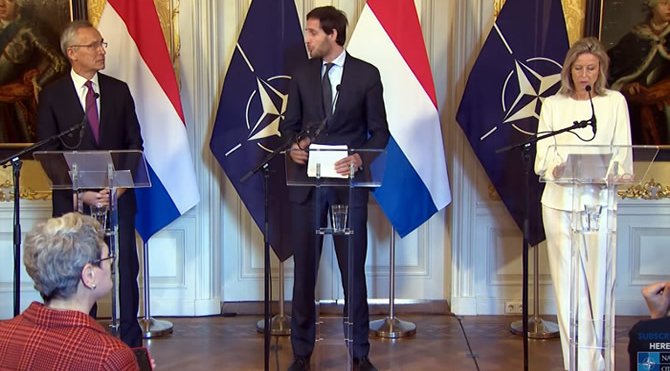 “Ukraine must decide what conditions are acceptable”, NATO Secretary-General Jens Stoltenberg said during a press conference in The Hague.

NATO Secretary-General Jens Stoltenberg, speaking in The Hague in the Netherlands today, Monday, November 14, said: “Ukraine must decide what conditions are acceptable. Many wars have been decided at the negotiating table, but this is not the case”.

He appeared at a press conference alongside Wopke Hoekstra, the Dutch Deputy Prime Minister and Minister of Foreign Affairs, and Kajsa Ollongren, the Minister of Defence.

During the course of his speech, Stoltenberg stressed how valuable the Netherlands is as “a valued and important NATO ally”. The country makes a strong contribution to shared security he emphasised. “In the air, Dutch jets protect NATO’s eastern flank. On land, Dutch troops serve in NATO’s battlegroups in Lithuania and in Romania, and at sea, you are leading one of NATO’s maritime groups”.

“I also welcome your ambitious plans to increase defence spending in the coming years. And to keep our technological edge in a more competitive world. All these contributions are important as we face a critical moment for European security”, he continued.

On the subject of Russia’s recent withdrawal from the Kherson region of Ukraine, he said: “Russia’s withdrawal from Kherson demonstrates the incredible courage of the Ukrainian armed forces. But it also shows the importance of our continued support of Ukraine. We should not make the mistake of underestimating Russia”.

“The Russian Armed Forces retain significant capabilities, as well as a large number of troops, and Russia has demonstrated the willingness to bear significant losses. They have also shown extreme brutality. We have all seen the horrific scenes from the liberated territories, as well as the indiscriminate attacks on civilians and critical infrastructure”, warned Stoltenberg.

“I also welcome that the Netherlands will provide another €120 million of assistance to Ukraine, including for upgraded Czech battle tanks. The current conflict also shows the importance of diversifying our energy supplies and protecting our critical infrastructure”, he added.

You can watch the full press conference in the NATO YouTube video below: