UPDATE – Banksy confirms he has created 7 murals in Ukraine 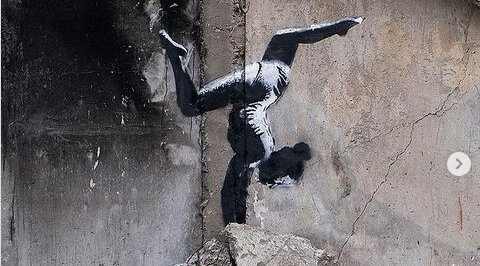 14:45 (November 15) – Banksy has confirmed to the Kyiv Independent that he has created seven murals in the war-torn country.

The British artist well known for his street art and whose pieces sell for millions, has travelled to a number of towns to create pieces that are uplifting for locals.

The tongue in cheek murals also poke fun at the Russian aggressor.

U.K. street artist Banksy has confirmed to The Art Newspaper that he has created seven murals in various locations in Ukraine, including Kyiv and two suburbs of the capital — Irpin and Borodianka.

Speculation that Banksy might be in Ukraine emerged after three works similar in style to his art were spotted in Borodianka earlier in November, the report reads.

10:27 (November 12) – Banksy works of art unveiled on his Instagram page appear to confirm that the artist is or has been in Ukraine.

Speculation was rife on Friday that he had indeed been in the town of Borodyanka, near Kyiv, after paintings began to appear on war torn buildings.

That speculation has since been confirmed after Banksy posted images of his latest artwork on his Instagram account on Saturday, November 12.

The murals appear to poke fun at Russian President Vladimir Putin all being based around judo, which Putin claims to be an aficionado in.

All in all, he has posted three images all with the simple caption “Borodyanka, Ukraine.”

The town, which has since been liberated, is one of the worst hit by the Russian bombardments that accompanied the start of the war.

Not the town is undergoing some refurbishment with many blocks having to be torn down as they are unsafe and beyond repair.

Quite what will happen to the Banksys remains to be seen given that they are all on the walls of derelict buildings and as such are not easy to move or to retain as part of renovations.

The Banksy works of art will, however, give towns folk renewed hope that there is life after the war.