BREAKING: After 29 years, Nancy Pelosi steps down as leader of the Democrats 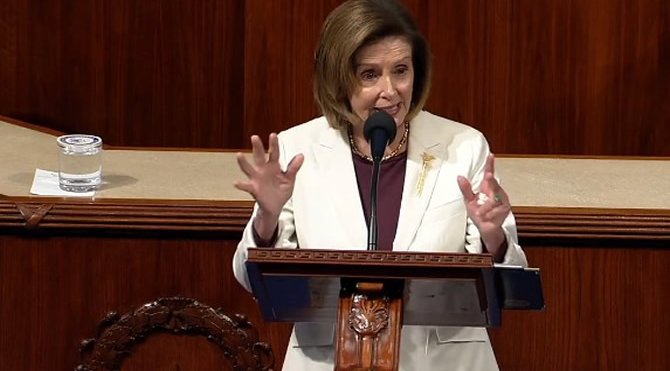 Nancy Pelosi, the US Speaker and leader of the Democrats is stepping down after 29 years at the top.

After 29 years as the leader of the Democrats, US Speaker Nancy Pelosi announced today, Thursday, November 17, that she is stepping down. The 82-year-old politician will stay on as a member of Congress but will not run for re-election as the Party leader next year.

Speaking on the Floor of the House of Representatives, Pelosi said: “My friends, no matter what title you all, my colleagues, have bestowed upon me, speaker, leader, whip, there is no greater official honour for me than to stand on this floor and to speak for the people of San Francisco”.

“This I will continue to do as a member of the house, speaking for the people of San Francisco, serving the great state of California, and defending our constitution. And with great confidence in our caucus, I will not seek re-election to democratic leadership in the next congress”, she added.

Join me as I make a major announcement on the Floor of the House of Representatives. https://t.co/Hi7zFqidbV

Pelosi has served as leader of the Democratic Party since being elected back in 2003 and on her arrival today at the Capitol gave no hint of the major announcement she was about to make. She has only just been re-elected to another two-year term by voters in her district of California so it seems unlikely that she will leave Congress.

It now remains to be seen who will put themselves forward to be the next leader. James Clyburn, the Democratic Whip from South Carolina, and Steny Hoyer, the Majority Leader from Maryland are two of Pelosi’s longtime lieutenants. Both have recently been undecided about their futures and are also in their 80s.

When asked about their plans this morning, both men avoided any mention of the leadership but confirmed that they will stay involved in the party.

Hakeem Jeffries, the 52-year-old New York Representative is one name that has already been touted as the next leader. He is currently chair of the House Democratic caucus and fits the demographic of a new generation of younger leaders that Pelosi spoke of.

Refusing to comment on any possible plans, he called Pelosi a ‘legendary leader’ as he exited a meeting of party leadership this morning which was not attended by Nancy Pelosi, as reported by dailymail.co.uk.