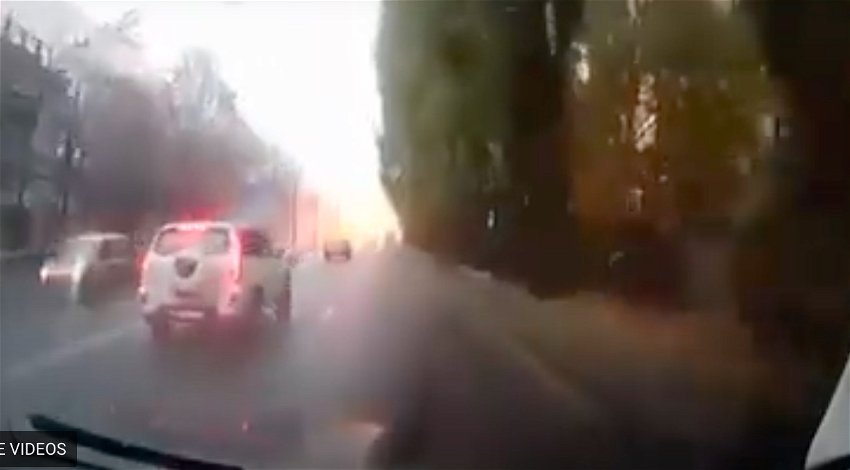 The moment a blast hits Dnipro is caught on dashcam. Credit: Shtirlitz53/YouTube.

THIS is the terrifying moment a car dashcam captured an apparent Russian missile attack hits in Dnipro, Ukraine.

The footage shows a driver travelling down a road in the rain when out of nowhere his dashcam captures a blast that hits the road in front of him.

The explosion, which happened in the driver’s direction, is not close enough to affect the vehicle – but looked dangerously close.

Perhaps bizarrely, the driver stops the car and says nothing, pauses for a beat, then continues on his way.

The dashcam footage, shared widely on social media, was uploaded by an officer of the Armed Forces of Ukraine, who says it is a Russian attack.

He says: “Genocide of the Ukrainian Nation.”

He also posted a link to the footage on YouTube.

This is the latest in shocking imagery captured as the Ukraine war rages on.

Yesterday, the moment the Ukrainian air defence system takes down a Russian missile was caught on video.

The footage, shared on Wednesday morning, on Ukraine’s Armed Forces news Twitter page, shows a missile shooting towards a building before being intercepted by the defence system.

This is one of two videos shared on the social media page, which regularly posts updates related to the Ukraine army’s movements during the war.

This comes following the shocking reports that two people died in Poland when two ‘stray’ cruise missiles struck a farm in a village near the border with Ukraine.

The Poland blast that killed 2 people is now believed to have been fired by Ukrainian forces at an incoming Russian missile.

NATO Secretary General Jens Stoltenberg said a deadly explosion in Poland was probably the result of a Ukrainian defence missile that killed two people. However, he adds that Russia bears “ultimate responsibility” for the war.