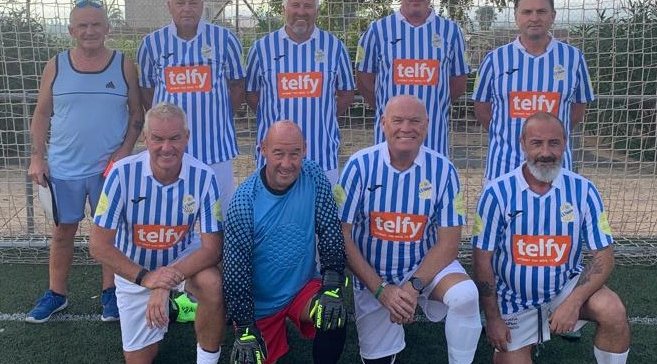 The Portobello finally got their Costa Blanca Walking Football League campaign underway with fixtures against The Red Lions of Fortuna and Portobello Shamrocks in a “local derby” last Monday, 7th November.

Unfortunately the “Shamrocks” failed to raise a team and the match was awarded to Portobello Campoverde WFC with 3 pts and a 3-0 score.

Red Lions were first to press before PCV got into their stride with a quick corner in 5 mins putting them 1-0 up.

2 mins later they were 2-0 up through a well taken goal by Webb.

A penalty awarded against the PCV keeper for picking up a back pass allowed the Red Lions back into the match before PCV quickly resumed their lead to 3-1 at the first break.

The second quarter saw PCV continue to dominate play although several of their players were warned by the referee for arguing with him and continually questioning his decisions.

It did not affect their play however and they went in at half time leading 5-1.

After the break Portobello took up where they left off going 6-1 ahead before the Red Lions snatched a goal back reducing the lead to 6-2. It didn’t take long though for the relentless PCV pressure to see them add a further 5 goals with goal number eight being the goal of the match scored by Webb, his fourth, as PCV went on to win the match 11-2. Alan Pluckrose also scored four.

So Portobello Campoverde top the CBWFL taking up from where they left off last season while saying Thanks for the support of their main sponsors Johnny and Louise Glennon of the Portobello bar and restaurant, Pinar de Campoverde.

Formentera WFC will be looking forward to their League match against Portobello Shamrocks as a win would take them level with PCV at the top of the league going into the winter break.

While it was The Red Lions heaviest defeat they are not despondent and will use the break to improve FOR when the League resumes in February.

CD THADER played their fourth friendly match since recently starting up and emerged 14-1 winners against “part time” club Entre Naranjos at Los Montesinos. Both teams played crisp passing football but Thader’s experience and growing confidence were too much for Naranjos.

Both teams retired to the Laguna Tavern afterwards and enjoyed splendid food and drinks provided by the Tavern.

For more information on Walking Football make sure you get YOUR copy of the Euro Weekly News. Supporters of Walking Football. Or contact [email protected] or club Facebook pages.”