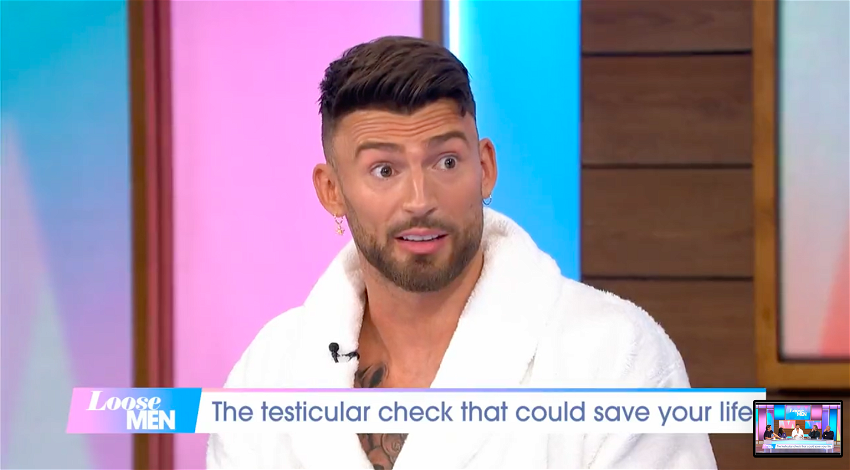 FANS have reacted after Jake Quickenden had his testicles examined live on TV today.

Reality TV personality Jake Quickenden was on the panel for a special episode of Loose Women – Loose Men – ahead of International Men’s Day.

Jake – who lost both his father and brother to cancer – appeared on the ITV daytime programme with an all-male line up to mark the day, which is tomorrow (Saturday, November 19).

He opened up to fellow panellists Vernon Kay, Larry Lamb, Olly Murs, and Ade Adepitan about losing both his father and brother to cancer.

Jake’s brother Oliver was 19 when he died of bone cancer in 2012 – the same disease that killed his father four years earlier, reports the Irish Independent.

On the hour-long show, the 34-year-old former X Factor star donned a white dressing gown before undergoing the live exam in a bid to encourage other men to get themselves checked out.

Huge well done and thank you to @JakeQuickenden for bravely getting checked on the show 👏👏 pic.twitter.com/QPsmMymIgj

He said: “I lost my dad and brother to cancer, so for me not checking is a way of just putting it to the back of my mind and not worrying about it.

“Sometimes I think if I checked and I felt something I’d be so worried it would eat away at me, so for me, it was out of sight, out of mind – just don’t bother checking.”

Jake, who became a father in 2021, with his wife Sophie Church, said that losing his two family members did not lead to him checking himself regularly – it was the opposite.

Thought this was really ,and applause to @JakeQuickenden for doing this 👏. I actually quite loose Men I think it should be more regular.

He continued: “But as I’ve got older, I’ve got kids now, it makes me think that is just a stupid thing to do.

He added: “That was a big step for me to even do because I was so nervous.

“An MRI, everything checked, bloods checked, and I felt quite proud and I put it out there.”

Fans flocked to social media to praise Jake for his bravery.

On Twitter, one said: “Amazing show today guys, well done @Jakequickenden for being so brave.”

A second wrote: “Well done, I was telling my son to do this (he’s 28). Guys must look after themselves.”

A third joked: “Well done Jake. On live TV, that took some balls!”

Another added: “Applause to @JakeQuickenden for doing this. I actually quite liked Loose Men I think it should be more regular.”