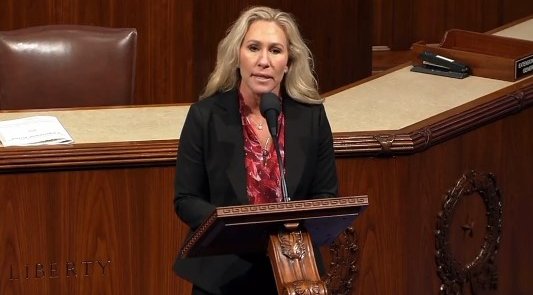 A press conference was held on Thursday, November 17, by Marjorie Taylor Greene, a Republican member of the House of Representatives of the US Congress. During her speech, she announced that she had introduced a privileged resolution that is intended to hold Joe Biden’s administration responsible for all the funding allocated to Ukraine by Congress.

Congress has appropriated US$54 billion to aid in the Ukrainian conflict she detailed. Another US$38 billion has been requested this week by President Joe Biden she added. The American taxpayers deserve to know where and how their dollars are being spent Greene continued.

Of the US$54 billion, US$44 billion of that total was for aid to Ukraine and ‘other affected countries’ Greene pointed out. “What other countries are we talking about? Are we talking about Poland where Ukraine fired two missiles and killed two people?”, she questioned.

In particular, the legislators are requesting that the Washington administration provide them with relevant documents and other materials within 14 days regarding the financial and military assistance allocated to Kyiv under US President Joe Biden.

As Greene noted, in recent months, billions of dollars have been spent to support Ukraine. “With the money we sent to Ukraine, we could have already secured our border, but we are not doing this”, the politician stressed. She was of course referring to the problem with the flow of illegal migrants on the southern border of the United States.

“We are ignoring the dangers on our border, the crisis for our national security, while we are fully protecting the border of another country, and also waging a proxy war with Russia”, Greene added.

“I think the American people and taxpayers deserve to know why the Biden administration and this Congress (the current Congress has a Democratic majority in both houses) is so interested in funding the defence of Ukraine’s borders, and not in protecting our borders”, she continued.

On February 24, Russian President Vladimir Putin announced a ‘special military operation’ in response to the request of the leaders of the Donbas republics for help. The West then imposed large-scale sanctions against Russia and increased arms supplies to Kyiv by billions of dollars.

We must audit every American taxpayer dollar sent to Ukraine, which is why I introduced a resolution to do just that.

The American people deserve to know where their money is being sent. pic.twitter.com/LpiZKB04id

.@RepMTG: "I think the American people and the taxpayers of this country deserve to know why the Biden administration and this Congress is so interested in funding the protection of Ukraine's border, and not the protection of our border." pic.twitter.com/0cGkTNyoJx

I’m calling for an audit of every single penny that has been sent to Ukraine.

This must be done as soon as possible for the American people.

Taxpayers deserve transparency and they deserve to see where their money is going. pic.twitter.com/WKg7YuPfFI