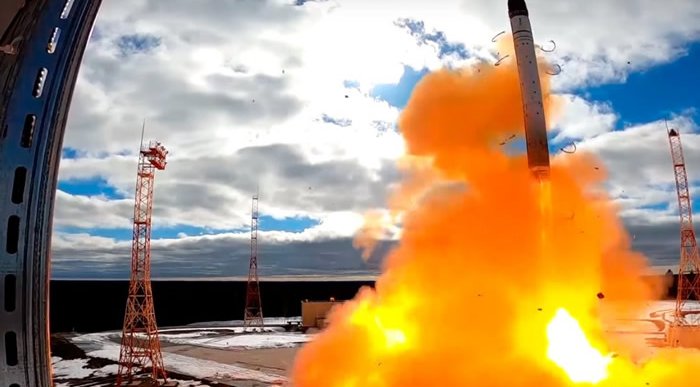 Image of the test launch of the Russia's new Sarmat missile. Credit: Russian Ministry of Defence

A test launch of Russia’s terrifying new Sarmat missile has been successfully completed according to the commander of the military’s strategic missile forces.

“Active re-equipment of the Strategic Missile Forces with modern missile systems continues. Flight tests of the Sarmat missile system were successfully carried out”, he is reported to have informed the media outlet.

Zvezda quoted Karakaev as also confirming the capabilities of the Yars PGRK following successful launches carried out at the Plesetsk state test cosmodrome.

The commander of the Strategic Missile Forces also added that the practical development of new methods of manoeuvring regiments had been completed. Since the beginning of 2022, more than 550 training marches have been completed, half of which took place at night.

In early November, Colonel-General Viktor Yesin, the former Chief of the Strategic Missile Forces General Staff, told Gazeta.Ru that the arrival of the missile system was somewhat delayed. This was partly due to the lack of a number of Ukrainian components and the use of new technological solutions in the production of ICBMs.

According to Yesin, at the beginning of the month, the Sarmat was in a high degree of readiness to take up combat duty. “Practically everything is ready for putting new missiles on combat duty. The products themselves have already been produced in the proper quantity at Krasmash, and they can be equipped with a missile regiment within a month”, the general detailed.

The RS-28 Sarmat is a fifth-generation Russian silo-based strategic missile system with a heavy multi-stage liquid-propellant intercontinental ballistic missile (ICBM). It is believed that it will replace the Voevoda complex, which has been in service with the Russian military since 1988.

A key difference from previous generations of intercontinental missiles is that the emphasis is not on the maximum weight of the warheads, but on their manoeuvrability. The Sarmat is able to better bypass the air defence systems of a potential enemy.

Its ‘orbital bombardment’ system – which is embedded in the rocket – allows it to be used not only for military purposes but also for launching civilian spacecraft into near-Earth orbit, as reported by gazeta.ru.