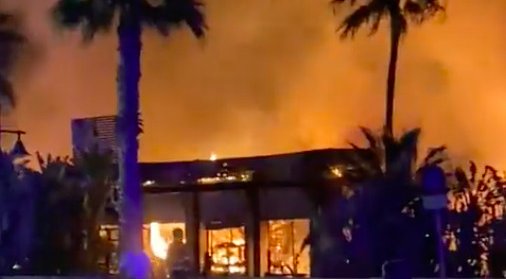 THIS is the moment a beach bar in Torremolinos, Malaga was ‘destroyed’ after a fire ripped through it.

The Chiringuito Kokun beach bar, located on the seafront promenade in Torremolinos, has been completely burnt to the ground following a fire that ripped through the bar in the early hours of Thursday morning.

Emergency services and local police were called to the scene of the blaze at 00.32 on Thursday, in the area of Los Alamos, reports AZ Costa del Sol.

Three fire brigades were immediately dispatched with 12 firefighters – double what would normally be on shift, according to a statement from the City Council.

The moment was captured by a bystander who posted the footage on their Twitter account @niporwifi, with the message: “Last night the Chiringuito Kokun in Torremolinos was burned. It was closed to the public.”

The local and national police put up a cordon to prevent cars from travelling down the road, while a cleaning company called Litosa supported the effort to put the fire out.

“We mobilised all the teams and worked for three to three and a half hours until it was extinguished,” said Alfonso Ric, head of the Torremolinos fire brigade.

“Although an hour later a fire brigade arrived on the scene to refresh the area and work to keep the whole platform damp.”

The fire was extinguished at around 06.30 hours. The exterior and interior of the premises were badly damaged.

There are not believed to have been any casualties during the blaze.

An investigation by the National Police is underway to find out the cause of the fire at the bar, which was closed at the time of the incident.