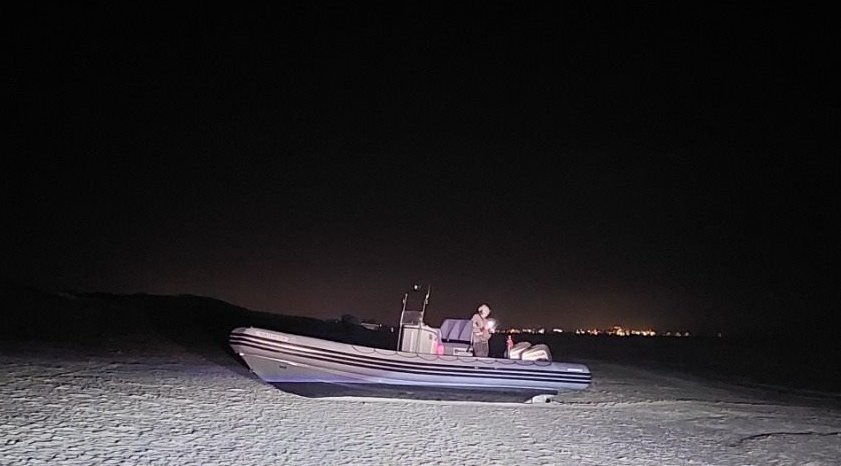 Image of suspected people-smugglers boat on the beach. Credit: nationalcrimeagency.gov.uk/Official

A person from the Manston migrant processing facility in Kent was admitted to a hospital where they subsequently died.

As confirmed by the Home Office today, Saturday, November 19, a person staying at the Manston migrant processing centre in Kent was admitted to a hospital this morning, where they subsequently died.

A spokesperson told Sky News that until the results of a post-mortem examination were revealed, there was no evidence to suggest that an infectious disease was the cause of death. They declined to offer any further comment on the incident. The deceased is believed to have arrived in the UK last Saturday 12, on a small boat.

“We take the safety and welfare of those in our care extremely seriously and provide 24/7 health facilities with trained medical staff at Manston”, stressed the Home Office spokesperson. In a tweet, the government department said it was ‘profoundly saddened by this event’ and sent its ‘heartfelt condolences to all those affected’.

There would “of course need to be a full investigation into this tragic case”, commented the shadow home secretary, Yvette Cooper.

It is “vital that a thorough and speedy investigation takes place to understand what happened and whether all the necessary procedures were followed”, said Enver Solomon, chief executive of the Refugee Council.

Controversy has surrounded the Manston facility in recent weeks. Earlier this month, temporary marquees were erected on the site after it was revealed that around 4,000 people were being housed in a space designed for 1,600 in a 24-hour period.

A source recently told Sky News that ‘unrest was spreading across the camp’, with some migrants threatening to go on hunger strike or self-harm.

The British government has now reached a deal with France with the objective of reducing the number of people attempting to cross the Channel. This reportedly involves increasing the amount of French police patrolling their beaches by 40 per cent with an extra £8m funding being made available.

Enhanced intelligence sharing is also being planned but migration and policing specialists have already claimed that all these things will still not be enough to stem the flow of migrants into the UK.