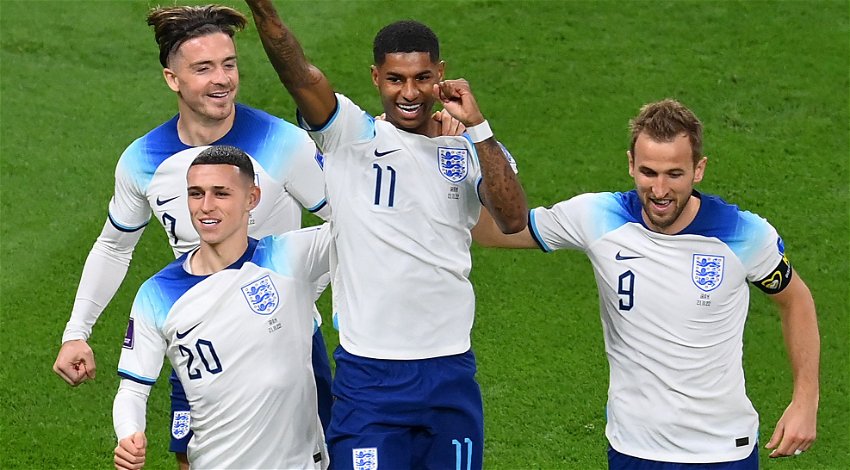 England comfortably started their World Cup campaign with an easy win against Iran, beating them 6-2.

Bukayo Saka was on fire as he scored two goals, while Marcus Rashford found the back of the net seconds after he was subbed onto the pitch.

Bellingham scored in the 35th minute, followed by Saka, who hit the back of the net at 43 minutes, before Raheem Sterling nipped a third in just before stoppage time.

In the second half, Saka netted a second goal at 62 minutes, while Iran bagged their first after Mehdi Taremi got the ball past keeper Jordan Pickford just three minutes later.

England didn’t flinch as Rashford scored the team’s fifth at minute 71 after just three touches of the ball after he came on the pitch.

But that wasn’t enough for the hungry side – Jack Greelish made it six in the 90th minute, as 10 minutes of stoppage time loomed, which brought a VAR review and successful penalty for Iran – a second for Taremi.

Celebrating our first goal of the @FIFAWorldCup back at home! 🙌 pic.twitter.com/ljzhh2tNHW

The team is likely to be breathing a sigh of relief amid the controversy surrounding the OneLove armbands, which fans branded “shameful”.

Harry Kane and co. started the match by taking the knee before the whistle in a nod against racism and inequality.

But Kane’s decision to back out of his earlier promise to wear the OneLove armband, which is an expression of solidarity with marginalised people, including the LGBT+ community, left a bad taste in some fans’ mouths.

Instead, the skipper wore a black band with a yellow heart and ‘no discrimination’ written across it.

England and Wales, among other national teams, decided against wearing the OneLove armbands at the World Cup in Qatar after FIFA threatened to impose sanctions.

The international governing body of association football threatened that captains could face an instant yellow card if they donned the bands.

What a moment for @sterling7! pic.twitter.com/cf6mTDCQmd

Elsewhere Iran’s side chose not to sing the country’s national anthem, in an apparent show of support for protesters back home.

A joint statement from the Football Associations of England, Wales, Belgium, Denmark, Germany, The Netherlands, and Switzerland said: “FIFA has been very clear that it will impose sporting sanctions if our captains wear the armbands on the field of play.

“As national federations, we can’t put our players in a position where they could face sporting sanctions including bookings, so we have asked the captains not to attempt to wear the armbands in FIFA World Cup games.”