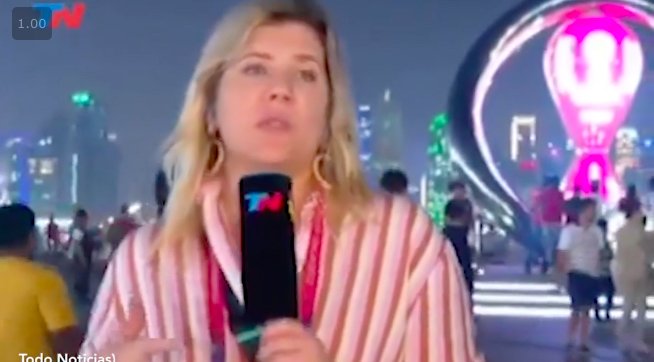 A World Cup TV journalist has been left shocked by the response of the police after she was robbed live on air in Qatar while reporting on the tournament.

In the build-up to the World Cup opening match which saw Equador beat the host nation 2-0, Argentine reporter Dominique Metzger was broadcasting live from the Corniche area of Doha when items were robbed from her handbag.

She reported the robbery to local police and was left scratching her head at what they told her in response to the incident.

The Qatari authorities asked her what punishment they would like to be imposed on the guilty party, reports the Mirror.

Ms Metzger said: “I went to the station and that was when the cultural differences began. The policewoman said to me: ‘We have high-tech cameras everywhere and we are going to locate him [the thief] with face detection. What do you want the justice system to do when we find him?'”

Dominique Metzger, the Argentine reporter, that had her wallet stolen live on air says the Qatari police assured her the thief could be identified using face recognition and asked what punishment she wanted for him:

"5 years in prison or do you want him to be deported." 🇶🇦🚔 pic.twitter.com/Ar8YNXUtPf

While she did not request a specific punishment, the journalist said she just wanted her stolen items to be recovered and returned to her.

This is the second incident reporters have suffered over recent days. Danish network TV2 was approached by a group last week whilst they were producing a piece. The footage of the incident went viral with tournament organisers being forced to apologise.

An official statement read: “Tournament organisers are aware of an incident where a Danish broadcast crew was mistakenly interrupted during a live broadcast in one of Qatar’s tourist destinations.

Elsewhere, it has been reported that approximately 15,000 cameras with facial recognition have been installed at stadiums.