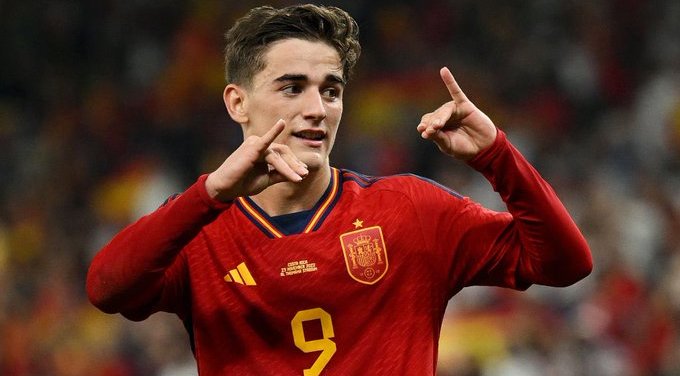 A rampant Spain has opened its World Cup with a 7 – 0 win over a battling Costa Rica, on the same day its main group rival Germany went down 2 -1 to Japan.

The game on Wednesday, November 23 was played before a crown of just over 40,000 who were treated to a goal fest.

A composed finish by Olmo gave Spain an early lead, the Barcelona midfielder putting the ball in the back of the net after just 11 minutes.

Not 10 minutes late Asenio made a late run into the box to latch onto a perfect cross from Alba. Fernando Torres followed that up with a penalty on 31 minutes and early in the second half takes advantage of some slack defending to score a second.

Gavi, the youngest player at a World Cup, then slotted a fifth on 74 minutes after volleying a cross from Morata into the back of the net. Solar then enjoyed the simplest of goals with a cross along the turf eluding the goalkeeper leaving the forward an easy tap-in.

On the day he becomes Spain’s youngest-ever player at a World Cup, 18-year-old Gavi scores a perfect volley 😍 pic.twitter.com/5xQ2lVVv7B

Morata, involved in many of the goals, bagged one for himself in the end shooting past an outstretched goalkeeper in the second minute of extra time.

Spain have scored seven goals in a match for the first time at the #FIFAWorldCup pic.twitter.com/biyQLQpiGg

A polished display by the Spanish team who showed their superiority in a game they were expected to win but did so in fashionable style.