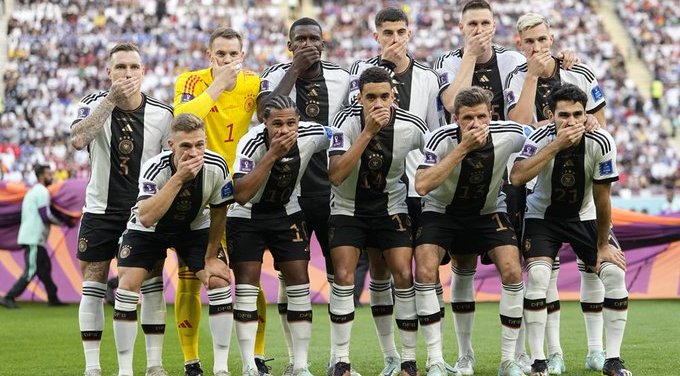 German players have covered their mouths in a unique protest against the ban of the OneLove armband by the world football governing body FIFA.

FIFA has told players and nations they would be fined and possibly even red carded should a player wear the armband, but on Wednesday, November 23 the German team found a way to protest both the ban and the host country’s policies.

Before the start of the game when teams lined up for their photos, the German team all held their one arm behind their back and the other over their mouth, showing they had been gagged.

The Germany team covered their mouths 🤐 in protest after FIFA banned the One-Love armband at the World Cup 👏👏🏳️‍🌈❤️ #FIFAWorldCup pic.twitter.com/7LVOyjbvAr

Many of the team had said they would ignore the ban and pay the fine for breaking the rule, but when FIFA then said it would sanction the player football associations were forced to climb down. All but Germany, whose actions cannot be fined, and which will more than likely be adopted by other teams going forward.

The German government showed their support for the team Germany’s Vice-Chancellor, Robert Habeck, urging the players to wear the armband in defiance of FIFA’s stance. Interior Minister, Nancy Faeser, went one step further wearing the ‘OneLove’ armband in the stadium alongside the President of the German Football Association Bernd Neuendorf.

Faeser told reporters that FIFA’s ban was a “huge mistake”, and that not only players but fans too should be allowed to show pro-LGBT symbols “openly”.

The armband was also worn in plain sight of Gianni Infantino, the FIFA President who has urged players and teams not to make the World Cup a political event.

The assistant referee checked the captain’s armbands to ensure they were within the regulations, with Neuer wearing the FIFA-approved anti-discrimination armband.

Germany made their stand on the same day that complaints streamed in from supporters who have had their clothing checked to see that it meets Qatar requirements. Those who were wearing rainbow hats etc had to remove them or have them confiscated.

The German players who covered their mouths in protest have received the full support of the German media, who said they were right to protest.