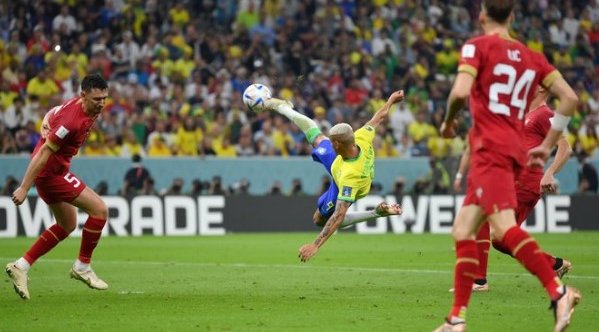 A contender for the best goal of the tournament was scored by Richarlison for Brazil in their World Cup clash with Serbia.

Brazil, one of the big favourites to win the 2022 Qatar World Cup, kicked off their campaign today, Thursday, November 24, against Serbia. Their group G contest was played in the Lusail Iconic Stadium, where the final will be played in December.

Switzerland ran out 1-0 winners in the other group match earlier today, so a win was vital for either team this evening.

A squad crammed full of talent included Neymar Jr, with the PSG star surely participating in his last World Cup. Serbia meanwhile have the prolific striker Aleksandar Mitrovic fit and ready to face the Brazilians.

The first 45 minutes while entertaining saw very little in the way of clear-cut attempts on goal by either team. Barcelona’s Raphina wasted the best opportunity of the half and repeated the same thing at the start of the second half.

Serbia never looked like scoring and what looked like a game plan of lying deep and defending seemed to be a very dangerous tactic against a team like Brazil. It all backfired after 63 minutes when Vinicius saw his low shot parried by Milinkovic. The rebound fell straight to Tottenham striker Richarlison who finally prodded the ball home to put the yellow shirts ahead.

Richarlison provided a moment of sheer genius in the 74th minute with what will be a contender for the goal of the tournament. He collected the ball, spun, and launched a stunning bicycle kick into the Serbian net for 2-0.

On this showing, Brazil maintained their position as one of the tournament favourites but with tougher opposition to come, that will be put to the test.