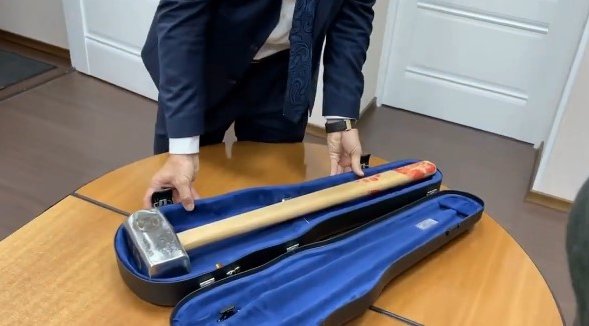 In response to a vote declaring Russia a state sponsor of terrorism, Wagner boss Yevgeny Prigozhin had a bloodied sledgehammer in a violin case delivered to the European Parliament.

🇷🇺social media share📹, in which allegedly a representative of Yevgeny Prigozhin handed over to a «representative of the 🇪🇺Parliament»a violin case with a sledgehammer inside, engraved with Wagner PMC logo and with traces of «blood» on the handle, calling it an «information case» pic.twitter.com/58SJqCyWUE

Prigozhin posted a video online which showed a violin case with a sledgehammer engraved with the logo of the Wagner PMCs lying inside it, with the handle all bloodied. He added that he wanted to deliver it as a gift to MEPs. “I don’t know what law the European Parliament is guided by, but according to our legislation, from today we declare the European Parliament dissolved”, he wrote.

It is believed that a representative of the pro-war channel CYBER FRONT Z was presented with the sledgehammer by Prigozhin’s lawyer, apparently with the intent of their forwarding it to MEPs in Strasbourg.

His action is a reference to the recent video that circulated online showing 55-year-old Yevgeny Nuzhin, an alleged Wagner deserter being executed by fellow mercenaries. In the video, a recruited convict was seen with his head taped to a pile of bricks with cling film before his head gets bludgeoned with a sledgehammer.

Nuzhin had been recruited to the private army while serving a life sentence for murder. When he was sent to the Ukrainian front lines, he decided to desert and go over to the other side. It is not clear how or who was involved, but he somehow found himself back in the clutches of Prigozhin’s men.

They subsequently carried out his bloody execution, a fate allegedly meted out to anybody from the private army who is found guilty of ‘treason’.

After the sick incident, Prigozhin, also dubbed ‘Putin’s chef’, described Nuzhin’s ending as a ‘dog’s death’ for a ‘dog’.