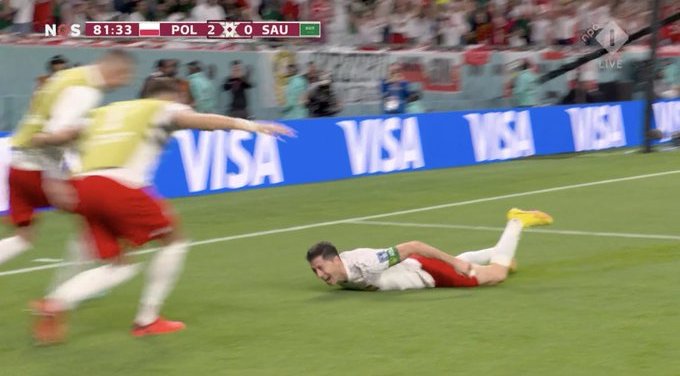 Robert Lewandowski finally gets a World Cup goal as Poland see off Saudi Arabia to top Group C having won both their games so far.

The win on Saturday, November 26 sees Poland put together their longest winning run since 1978, with three wins in three outings.

Although Saudi enjoyed the majority of the possession, they were unable to convert their many chances on goal wasting many chances. The side that achieved the shock victory over Argentina just didn’t turn up for the game.

Piotr Zielinski gave Poland the lead in the 39th minute driving a shot home from close range.
It was then Saudi Arabia’s chance with a penalty awarded in first half stoppage time, but goalie Szczesny’swas up to the task first stopping the shot from Salem Al-Dawsari before saving Mohammed Al-Burayk’s rebound.

In a frenetic second half, Poland hit the woodwork twice while Szczesny denied Al-Dawsari again from close range.

Lewandowski’s goal in the 82nd minute sealed it for Poland, with the striker taking advantage of a mistake by Abdulellah Al-Malki’s to score for the first time in his fifth World Cup game.

The loss caps a series of bad runs against European teams for the Saudi’s, who have lost their last nine World Cup matches. The loss also puts them at the bottom of the league when it comes to clean sheets with only six per cent in the history of the tournament.

Polish goalie Wojciech Szczesny is the third to save a penalty and keep a clean sheet in the same match at this year’s competition with Thibaut Courtois and Guillermo Ochoa already having shown how it’s done.

With talisman Lewandowski getting his first World Cup goal, perhaps it is Poland’s year again to emulate past performances that have seen them progress into the semis.