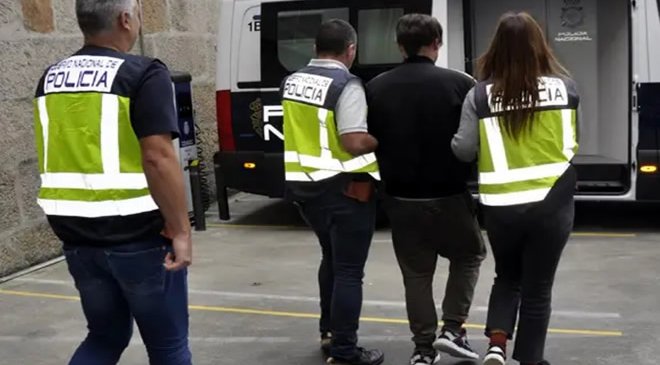 Image of a fugitive being arrested by police officers in Alicante. Credit: Policia Nacional

Two fugitives wanted by the authorities in Belgium and Poland were arrested by the National Police in the Costa Blanca city of Alicante.

National Police officers in Alicante were responsible for the arrest of two fugitives who had a European Arrest Order for Extradition (OEDE) issued against them by the authorities of Belgium and Poland. They faced prison terms for crimes against property, as reported today, Sunday, November 27, by larazon.es.

One of the detainees – a 24-year-old French national – was wanted by the Belgian authorities for the crimes of robbery with violence and misappropriation. He faces a sentence of 20 years in prison for these offences committed in August of this year.

According to police sources, the fugitive wanted by the Belgian authorities was located by officers carrying out a crime prevention patrol in one of the streets in Alicante. They observed two men who, upon noticing the police presence, showed an elusive attitude.

They were subsequently stopped and after verifying the identity of one of them, the policemen discovered the search and detention order for extradition that was in force.

The second criminal – a 40-year-old Polish national – was wanted by the Polish courts for a crime against property. He allegedly appropriated more than 220,000 PLN (approx €46,959) after not returning it to the person who had lent it to him. He was detained in a hotel in the Costa Blanca city.

His crime allegedly dates back to a period between 2015 and 2017, for which he faces a prison sentence of one year and eight months.

Both detainees were placed at the disposal of the Central Investigating Courts of the National Court, which will be in charge of processing the different European Arrest Warrants for Extradition.