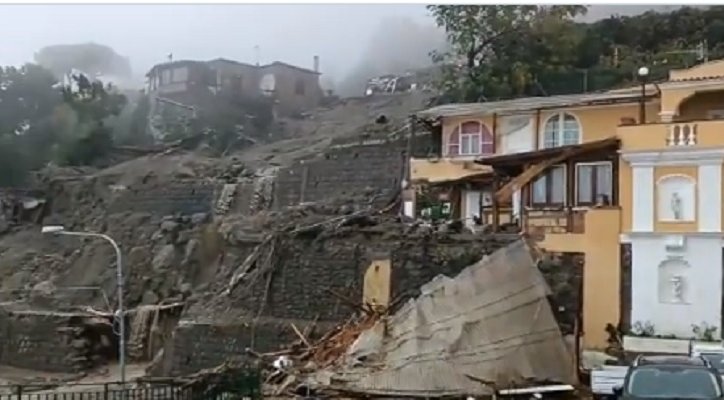 18:37 (November 28) – The construction of illegal buildings on the island is being blamed for the landslide that killed eight people.

This is not the first landslide to result in the death of locals, back in 2006 a father and his three daughters were killed when the mountainside came down.
The island is a popular tourist destination with its hilly coastline drawing visitors from around the world. But it is also known for its dodgy buildings, many of which have been illegally built and in areas that no building should take place.

Geologist Arcangelo Francesco Violo told Reuters that Ischia sits in an earthquake zone, that makes it vulnerable to natural disasters.

He added: “There has been a chaotic development of buildings and an improper use of land, which made things worse. There are buildings in places where geological conditions would not allow construction.”

Some 28,000 requests to participate in amnesties for houses built illegally since 1985 have been submitted according to the Legambiente environmental group.

Although no data is available on how many were approved, some 600 orders were issued for demolition on the densely populated island.

It is not known whether the government intends to review buildings and building practices in light of the latest disaster.

11:20 (November 28) – A couple and their new-born, a little over three weeks old, have perished in the landslide that swept through the village of Casamicciola Terme.

Authorities say that four people are still missing with the search continuing to find the remaining bodies.

They have also confirmed that among the dead are two brothers aged sic and ten, Elenora a 31-year-old and a 58-year-old Bulgarian. The details of the remaining victim have yet to be released.

Four more people are believed to be in hospital receiving treatment with one having suffered severe trauma to the chest.

Some 230 people are said to have been evacuated to safety as the search continues.

12:56 (November 26) – Eight people are confirmed dead and many more injured in a landslide that occurred this morning on an island in Ischia according to the Deputy Prime Minister Matteo Salvini.

The landslide is said to have occurred following torrential rain overnight, sending mud, debris and trees into the town of Casamicciola Terme.

The mud overwhelmed the small community that houses around thirty families wiping out at least ten buildings and washing cars and other goods into the sea.

A number of people are still missing with rescue services struggling to access the area.