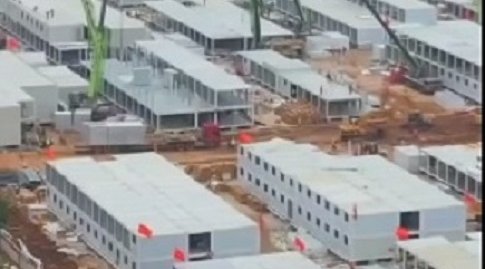 08:41 (November 29) – Chinese police have been forcing people to delete videos and pictures from their phones as they struggle to control the news.

The protest which started out a few days ago was originally aimed at authorities enforcing the zero-tolerance COVID-19 policy, have turned violent and increasingly anti-government.

Footage showing the dissent has flooded social media platforms and news sites, resulting in protests popping up all over the world. As a result, authorities have resorted to numerous different tactics to try and limit coverage.

VIDEO: A Chinese police patrol orders people to delete content on their smartphones on Urumqi street in downtown Shanghai.

Demonstrators gathered in the area at the weekend to protest against Covid-19 lockdowns and call for greater political freedoms pic.twitter.com/Qr1j3qAK4V

19:38 (November 28) – Chinese state television is said to be editing out fans who are not wearing masks at the World Cup.

According to news site The Insider, television coverage of the football has been altered to give the impression that it is not just in China where the draconian anti-coronavirus measures are in place.

Scenes that would show the fans in the stadium are said to be replaced by shots of the players and the bench.

Such protests are rare in China and are generally dealt with swiftly and with force, but the authorities have been overwhelmed by the sheer number of protestors and the strength of feeling over the issue.

Some cities have opted to reduce the number of restrictions; however, the move has had little effect on the overall mood.

10:31 (November 28) – Demonstrations have broken out all across China as residents vent their anger over the country’s zero tolerance policy on COVID-19.

Protests over the policy are not new but recent events that led to the death of ten people in their apartment has resulted in growing anger and clashes between citizens and authorities.

The weekend’s protests were different in that they for the first time showed dissent towards President Xi Jinping, who was only weeks ago elected for a third term in office. Until now considered untouchable and in full control of the country and the ruling elite, the weekends protests will be a cause for concern in the halls of power.

Open criticism of the government is not tolerated in China and can result in stiff penalties, however, with passions running high the police by and large allowed the protests to continue uninterrupted. Shanghai did see some arrests and the police restricting access for demonstrators cordoning off streets in an effort to control the crowds.
Unusually the protests have been very vocal and have been violent and destructive with protestors smashing metal gates and knocking down barricaded as they forced their way through blockades.

According to the BBC police officers, private security guards and plain-clothed police officers have been on the streets confronting protesters. After they were moved on protestors reappeared later in the day in a silent protest holding blank pieces of paper in front of their faces.

One protester told the BBC that he felt “shocked and a bit excited” to see people out on the streets. He said it is the first time he’d seen such large-scale dissent in China, with people openly calling for Xi to stand down and the Communist Party to go.

The protestor continued saying the lockdowns made him feel “sad, angry and hopeless.”

Some relaxation of the policy has taken place in areas but with millions of people effectively remaining “locked up,” protests could continue into the week resulting in further confrontations with authorities who up until now have acted with restraint.

13:58 (November 26) – Protestors have taken to the streets in China blaming government COVID-19 policy for hardship and deaths.

A recent fire in a high-rise block which residents weren’t allowed to leave due to COVID-19 restrictions has prompted locals to take to the street blaming the zero-tolerance policy for their deaths.

State media has however, disputed the story saying that the area was not under quarantine and people were able to leave the building. But few seem to believe the view of events as they worry about their own safety during the draconian lockdowns.

The footage posted by the BBC online shows large crowds involved in heated discussions with officials in increasingly acrimonious exchanges.

Footage is provided by the BBC.

12:17 (November 25) – China is building quarantine camps as its zero tolerance COVID-19 policy turns people against their government with clashes between authorities and those quarantined turning increasingly violet.

In Zhengzhou alone more than six million people have been forced to stay indoors according to AFP News on Friday, November 25. The city, home to the world’s largest iPhone factory, has barricaded in residents in eight districts forcing them to remain at home for the next five days.

The lock up comes after a few cases of the virus were recorded in what experts say is a draconian and unnecessary reaction.

One of the most underreported stories right now is China’s failing Zero-Covid policy.

This violent protest is from the Foxconn iPhone factory in Zhengzhoupic.twitter.com/BbaskNWdce

To make matters worse people have died either as a result of not being allowed to visit the hospital for other ailments, or in fires that have ravaged buildings. According to the South China Morning Post at least ten people have lost their lives in a building fire during the lockdown.

Authorities are said to be going further with the country building quarantine camps where those that test positive will be sent, away from their homes, their work and their families.

For the second day in a row, China has recorded an explosive increase in coronavirus infections.

In the city of Guangzhou, the capital of Guangdong province, which has the largest number of cases, the construction of a quarantine center for 80,000 people has begun. pic.twitter.com/LnOZdVdVjO

The government policy which compels local authorities to impose gruelling lockdowns, travel restrictions and mass testing has raised tensions in the country considerably. It has also hit the economy and has created supply issues across the world.

China’s positive infections is at an all-time high of 33,000 in a country of 1.4 billion, whereas the UK recorded 19,386 over the last seven days in a country of less than 70 million people.

China builds quarantine camps as zero tolerance COVID-19 policy leads to violent clashes and deaths, whilst in the rest of the world the approach is to manage the virus through self-isolation and vaccination.