Could Parkinson ’s disease be what brings an end to Vladimir Putin’s reign? 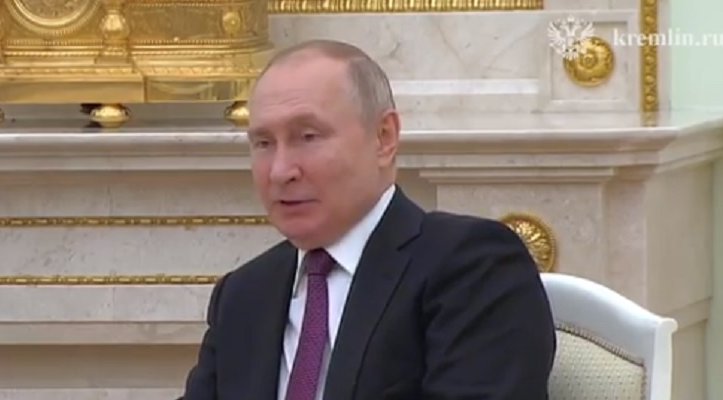 The question has arisen whether Parkinson’s disease could bring an end to Vladimir Putin’s reign after he was seen puffy faced and shaking during a meeting with Kazakhstan President Kassym-Jomart Tokayev, 69, on Monday.

Experts who viewed the video said on Tuesday, November 29 that Putin’s condition indicated that he was suffering from Parkinson’s. Throughout the meeting Putin’s foot twitched and he appeared to be trying to stop his rightarm from doing the same.

According to the Mayo Clinic Parkinson’s usually affects people over the age of 60, with many more likely to contract the disease. This usually results in tremors, slowed movement and impaired facial expressions, although there are many other symptoms.

The clinic also says that those suffering from the disease, which is not curable but can be managed, includes thinking difficulties, emotional changes and sleep disorders.

The footage from the press conference following the meeting showed Putin to be displaying many of the symptoms including his right arm hanging limp by his side.

⚡️Russia & Kazakhstan proceed from the fact that there can be no winners in a nuclear war, it should never be unleashed – Putin & Tokayev's declaration

Reportedly Tokayev had a meeting with Putin in Moscow pic.twitter.com/nQxq1CtRRD

The Sun claim to have documents that confirm his has early onset of Parkinson’s and that he pancreatic cancer.

Perhaps adding to the difficulties the president is having, was the tense meeting with Tokayev who made his opposition to the war very clear. Although they exchanged documents there was only a brief handshake and hardly any eye contact.

Tokayev did not engage with Putin during the signing ceremony to mark 30 years of diplomatic relations. Putin posed for the cameras with his copy but appeared tired and puffy faced.

The Kazakhstan president finished saying that there is “every reason to be satisfied” with relations between Russia and Kazakhstan, but he went on to warn Putin: “You need to look ahead, and it is for this purpose that I have come here.”

Kazakhstan has offered safe haven from those fleeing the draft in Russia, much to the chagrin of the Russian leader. The country has also declined to provide Russia with any support in the war.

Tokayev made his views very clear to Putin at a security conference in Armenia saying: “We must not allow the fraternal Russian and Ukrainian people to part ways for tens or hundreds of years with mutual unhealed grievances.

He went on to demand that a peace formula be found.

If indeed Putin has Parkinson ’s disease it could be what brings an end to Vladimir Putin’s reign?