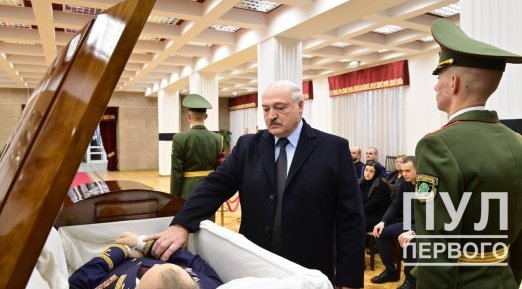 A farewell ceremony for the deceased Belarus Foreign Minister Vladimir Makei was held in the Belarusian capital city of Minsk.

A farewell ceremony for Belarusian Minister of Foreign Affairs Vladimir Makei, who died suddenly on 26 November, was held in the Officers’ House in Minsk on November 29, according to BelTA. President Aleksandr Lukashenko was reportedly the first person to pay tribute to the deceased politician.

Members of Vladimir Makei’s family and employees of the Ministry of Foreign Affairs were present at the event. These included senior officials, heads of ministries and departments, and government agencies.

Images and video of the Belarusian head of state at the Officers’ House ceremony were posted on the Pul Pervogo Telegram channel, with a message saying that Aleksandr Lukashenko came to bid farewell to the late Minister of Foreign Affairs. Makei was subsequently buried at the Kalvaryja Cemetery in Minsk.

Although the late politician passed away on Saturday 26, no official explanation or statement has been released regarding his mysterious sudden death at the age of 64. Opponents of Russian President Vladimir Putin were quick to suggest that the FSB security services had poisoned him.

It was reported that Lukashenko immediately ordered all of his serving staff and members of his household to be fired and replaced. Makei was a known opponent of Belarus ever getting involved in the conflict in Ukraine and it has been alleged since his death that he had allegedly been in secret negotiations with Western officials.