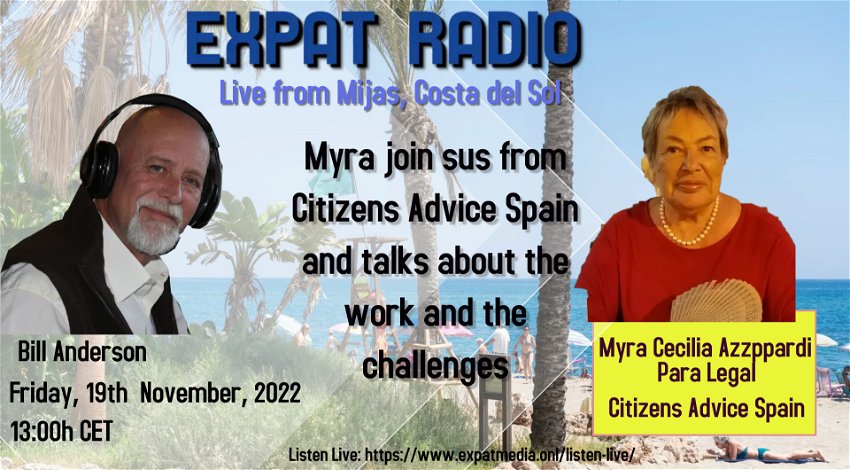 Myra Cecilia Azzopardi set up Citizens Advice in Spain nine years ago. Born in Gibraltar to a military family, she became an expat from the age of 7 travelling the world with her family. Citizens Advice Spain has over 80,000 members following on social media and also those who follow the website.

Having settled in Spain in around 1994. She became involved in the Expat community when she stepped into the political world and she decided that in order to secure their vote, troubleshooting the problems facing them would create the link.

Myra is a registered paralegal but dealing with the volume of queries can be very demanding, even with some assistance. Spain can be challenging in terms of the variety of arrangements in place in different parts of the country, resulting in a “maybe, should, could” reply rather than a solid single answer to complex questions.

Citizens Advice doesn’t just deal with Brexit and post-Brexit issues but also with the problems arising from “getting things wrong” within a system which can be very different from what we are used to in the UK. She touches on the issues of embargoes on Bank Accounts, negotiating back-payments on Local taxes and the need to accept the fact that Spain is different.

Put on the spot, Myra agreed that problems often arise because of naivety, not doing our homework, or sometimes out a sense of “entitlement”. She recommended a sign at UK airports stating that “You are now leaving the UK and wherever you are heading to, it is not the UK, and things may be done differently”. Also, we have her take on Gibraltar.

For the full interview go to You Tube. https://youtu.be/mpLAPL44dP0