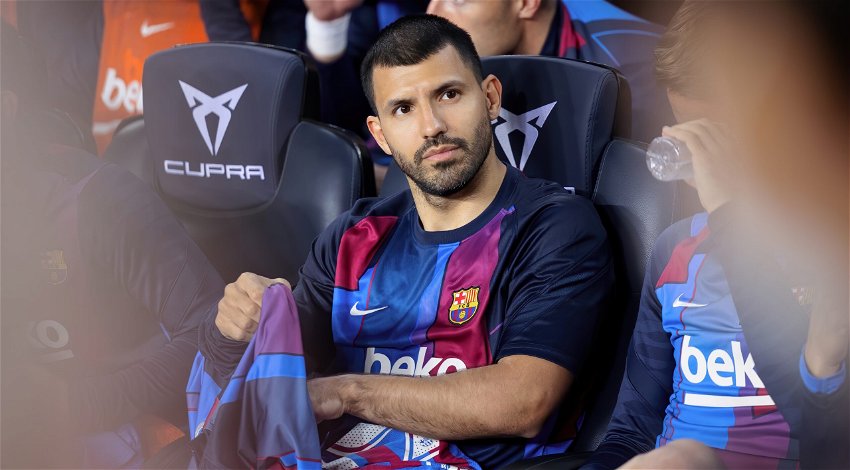 Former Barca star Sergio Aguero says ‘that could have been me’ after young footballer dies aged 22. Image: Christian Bertrand/Shutterstock.com

FOLLOWING the tragic death of young 22-year-old footballer Andrés Balanta, who died after collapsing during training on November 29 from a suspected heart attack, former Barcelona and Manchester City legend Sergio Aguero admitted the same thing could have happened to him.

After news spread that the young footballer had died suddenly during training in Sergio Aguero’s homeland of Argentina, Man City’s top goalscorer responded to the news live on his Twitch stream as it broke.

The 34-year-old, who was forced to retire after tests revealed he had a heart condition following chest pains during a match, said: “Balanta died, they say. In training? Now?

“That’s s***, I clearly remember that the doctor told me that that can happen, and that’s why they (the doctors) don’t allow me to play because what I had…

He added: “I don’t know what happened with the controls [medical testing]… it’s really difficult…”

On Tuesday, November 29, the Colombian Football Federation announced the sudden death of defensive midfielder Andrés Balanta, who died suddenly after feeling unwell in training for Atlético Tucuman (Argentina), where he had been on loan from Colombian champions Deportivo Cali.

The 22-year-old died suddenly of a suspected heart attack after collapsing in training.

According to local reports, emergency CPR was performed on the young footballer before an ambulance arrived.

However, paramedics were unable to revive the player who died a few minutes later on the way to the hospital.

Andrés Balanta played at both the U17 and U19 World Cup for his country.

“The Colombian Football Federation regrets the death of Andrés Balanta, player of the @FCFSeleccionCol in its different categories. We send our condolences to his family, friends and relatives. RIP.”

Atlético Tucuman wrote: “Atlético Tucumán regrets to confirm the death of Colombian soccer player Andrés Balanta. We embrace and accompany with deep respect your family and friends at this time.”

Aguero announced his retirement from football back in December 2021 at the age of 33.

The Argentine football icon called time on his illustrious playing career after a heart condition scuppered his move to Spain’s FC Barcelona – he only played five times for the club.

Aguero scored a record 260 goals in 390 games for Manchester City and won five league titles during his time in the Premier League, before his move to the Spanish giants.

Aguero agreed to join Barcelona in May, signing a two-year deal with a buyout clause of €100m (£86m) after leaving City.

Announcing his retirement at a press conference in Barcelona, an emotional Aguero said at the time: “This conference is to communicate that I have decided to stop playing football.

“It is a very difficult moment. The decision I have made I have taken for my health, that is the main reason, because of the problem that I had a month-and-a-half ago.

“I was in good hands of the medical staff who have done their best and have told me the best thing would be to stop playing.

“So I made that decision about a week ago and I want to tell everyone I did everything possible to have hope, but there wasn’t very much.”

The striker was taken to hospital after experiencing chest pains and breathing difficulties during Barcelona’s 1-1 draw with Alaves in October 2021 and was subsequently ruled out of action for three months following a cardiac arrhythmia diagnosis prior to his retirement.