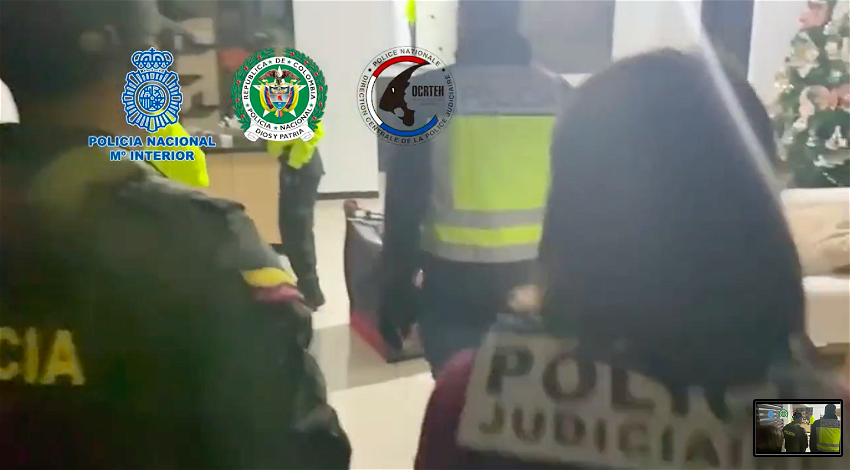 Call centre in Spain 'arranged trafficking of women to France for prostitution' as 12 arrests made. Credit: Policia Nacional/Twitter.

Eleven women who are alleged victims of a criminal network dedicated to trafficking people for the purpose of sexual exploitation have been freed.

A joint police operation between the Policia Nacional, the French Police, and the Colombian Police, with the collaboration of Europol, has dismantled the alleged criminal organisation, which operated a call centre Spain, France, and Colombia.

The suspected criminal network had a call center in Spain where they received calls from clients made from French territory. The women were recruited in their countries of origin and allegedly tricked into prostitution in the Paris region.

There are a total of 12 detainees, six in Spain, four in France, and two in Colombia, and 25 house searches have been carried out.

The victims, released in France, were women from South America who were recruited in their countries of origin by deception to work as prostitutes in Paris.

The police investigation began in France when the authorities of that country learned of the existence of several women who were being forced into prostitution in hotels and flats in Paris.

The investigations of the French authorities found a suspected criminal organisation dedicated to recruiting vulnerable women through false job promises, before trafficking them to France in order to prostitute them.

After multiple investigations, the officers were able to verify that the criminal network had established a call center in Spain where calls made by clients from France were received and where appointments with women in French territory were managed.

The call centre “functioned as an intermediary between clients who called from France and the women who performed sexual services.”

It was also possible to confirm that the multiple advertisements published on the internet offering women’s sexual services were created in Spain.

The joint police operation has ended with the arrest of 12 people and the entry and search of 25 homes in Spain, France, and Colombia.

In Spain, there are six detainees – three in Madrid and three in the province of Malaga – who are charged with the crimes of trafficking in human beings for the purpose of sexual exploitation, prostitution, money laundering, and belonging to a criminal organisation.