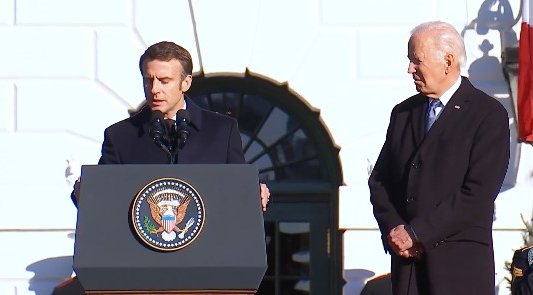 According to a joint statement issued on Thursday, December 1, by US President Joe Biden and France’s President Emmanual Macron, they have pledged to hold Russia’s Vladimir Putin accountable for alleged ‘atrocities’ and ‘war crimes committed in Ukraine.

Speaking to members of the press assembled inside the Oval Office in White House, the two leaders announced their new commitment to helping those affected by the conflict and to continue supporting Ukraine against Russia’s ‘brutal’ invasion.

The temperature may be chilly on this bright December day, but our hearts are warm to welcome such close friends to the White House. pic.twitter.com/5VIG2E9Mc0

Macron was on his first state visit to the US since Joe Biden came into office. The two leaders were celebrating relations between their counties of more than 200 years.

Tune in as I host a joint press conference with President Emmanuel Macron of France. https://t.co/3mppuSw9Ha

“I’m prepared to speak with Mr. Putin if in fact there is an interest in him deciding he’s looking for a way to end the war. If that’s the case, in consultation with my French and my NATO friends, I’ll be happy to sit down with Putin to see what he wants, and has in mind. He hasn’t done that yet”, stated the POTUS.

Despite the recent blip in US-French relations over the Inflation Reduction Act’s green subsidies, the two men presented a united front during the press conference. Macron had previously described this as being ‘super aggressive’ against European companies.

In an effort to avoid any potential trade war being triggered bewteen their nations, Joe Biden agreed that he would ‘tweak’ its contents. “We are going to continue to create manufacturing jobs in America, but not at the expense of Europe”, he stressed, as reported by euronews.com.

France was our first ally.
The first country to fly the American flag after our Revolution.
The first to host our diplomatic post.

But more than anything — France was our first friend. pic.twitter.com/W5wbNKVdQj