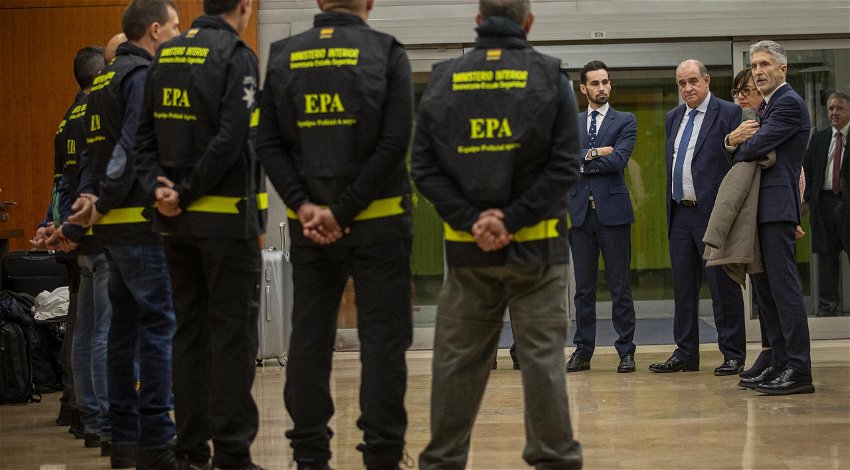 The Spanish police support team that will investigate war crimes has begun its work in Ukraine.

The team, called Grande-Marlaska, met at dawn this Thursday, at the Adolfo Suárez Madrid-Barajas airport, with the eleven agents of the National Police and the Civil Guard, before its flight to Ukraine, which is still fighting a war against Russia, to investigate war crimes against them.

On November 2, an outpost of the police team held a meeting in Kyiv with representatives of the Ukrainian Prosecutor’s Office to establish the collaboration framework and determine the work areas in the country.

The mission of the team is to work alongside Ukrainian investigators and prosecutors in the collection of evidence that may be incorporated into legal proceedings opened in Ukraine, and that will serve to identify the victims of possible actions contrary to International Law.

The specialists are trained to create complete three-dimensional models of bombed facilities and will investigate on the ground the type of material, weapons, and explosive devices used, as well as the techniques used, and, where appropriate, will collect information on the persons or groups responsible for the attacks, which are classed as “serious crimes under investigation”.

The Minister of the Interior, Fernando Grande-Marlaska, met at dawn this Thursday with the Police Support Team (EPA) that will investigate the possible commission of war crimes and crimes against humanity in Ukraine.

Grande-Marlaska was accompanied by the Secretary of State for Security, Rafael Pérez, the general director of the Police, Francisco Pardo, and the director of the Civil Guard, María Gámez.

The team, which is already in Ukraine, is made up of eleven agents of the Policia Nacional and Guardia Civil, coordinated by a commander and a chief inspector.

The troops come from the Systems and Scientific Police departments of the National Police and the Criminalistics Service of the Guardia Civil of the Policia Nacional, in addition to having specialists in the deactivation of explosives from both bodies.

The creation of the police support teams is based on an instruction signed by the Secretary of State for Security, Rafael Pérez, which constitutes and establishes the availability, operability and support, and reaction capabilities of this police team whose objective is the investigation of serious crimes within the framework of international law.

The instruction of the Secretary of State placed the EPA at the disposal of the International Criminal Court, with jurisdiction over the most serious crimes of importance to the international community as a whole, complementary to national criminal jurisdictions, and which may require collaboration and support for the police capacities of the signatory States of the Treaty of Rome to carry out the exercise of their functions.