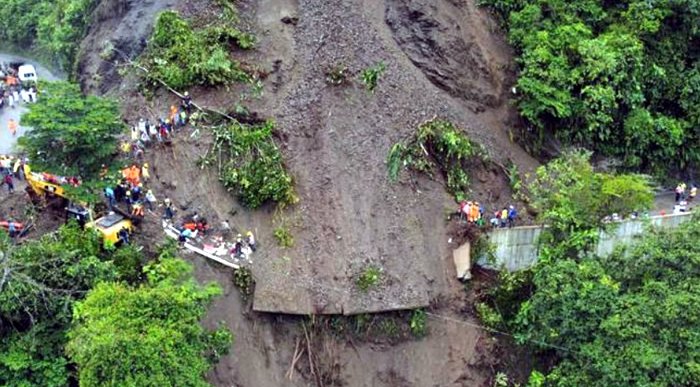 Image of the landslide in Risaralda, Colombia. Credit: Government of Risaralda

A landslide near the town of Risaralda in Colombia buried several vehicles under tons of earth, including a bus carrying 31 passengers.

In the early hours of Sunday, December 4, a large landslide occurred on the road that leads from the municipality of Pueblo Rico, in Risaralda, to the town of Choco, in Colombia. Several vehicles were reportedly caught up in the event, including a public bus.

At least 31 passengers were travelling on the bus along the Cali – Condoto route. It became trapped in the landslide, along with other private vehicles which ended up underneath the fallen hillside as can be seen in video footage posted on Twitter El Pais Cali.

Ximena Carmona, the coordinator of Risk Management in Risaralda confirmed that the 31 bus passengers were rescued unharmed. Three other people were transferred to care centres with minor injuries she added.

“So far, we have three people who have arrived at the hospital in stable condition and two other people who arrived at the care centre by their own means. At the moment there are no reports of deaths”, she said.

Relief agencies and the local authorities have continued responding to the emergency. Pereira Official Fire Department sent 10 USAR units and two canines to Pueblo Rico to support the rescue and earth removal efforts, as reported by caracol.com.co.