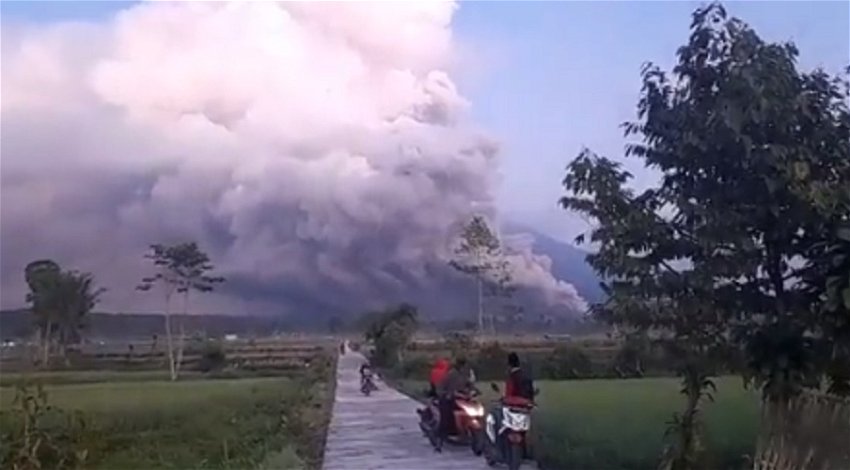 Mount Semeru on the island of Java in Indonesia has erupted once again sending villagers scrambling for safety amid fears that a larger eruption could follow.

The eruption on Sunday, December 4 has sent a mushroom cloud of ash and gas into the air mixing with the monsoon rains that are prevalent this time of year. That has resulted in rain that is more like soft mud making roads and walkways slippery and dangerous.

Hot ash is said to have spewed up to 1.5 kilometres (1 mile) into the air and lava has flowed down the mountainside towards local villages.

Indonesian authorities had raised the alarm allowing villagers to flee to safety, but they have since raised the alert to the highest level suggesting that more activity is imminent. Villagers have been told to remain at least eight kilometres (five miles) away from the crater.

All the villagers are said to have reached safety; however, many do not expect their homes to be as lucky with the advancing lava flows likely to destroy all the properties in its path.

One emergency responder, Gunawan, filmed the clouds above as a midday sky turned ominously dark as though midnight.

“It’s getting dark, bro,” he said to the camera as a seismograph whistled in the background.

The #eruption of Mount Semeru displaced up to 1,979 people in 11 different locations. #volcano #Indonesia pic.twitter.com/C2EKq3ucfq

With the internet down and phone signals patchy, villagers were alerted to the danger by sirens and the beating of bamboo drums by local volunteers. A similar eruption a year ago resulted in the death of 51 people and the destruction of many homes.

The highest mountain on Java, Semeru lies around 800 kilometres (500 miles) southeast of the capital Jakarta among a cluster of craters in a moon-like landscape. The area is home to 130 active volcanoes.

The majority of the villagers, who live around Mount Semeru have taken shelter in local halls and schools as far 12 kilometres away, after they were sent scrambling for safety as the volcano erupted.