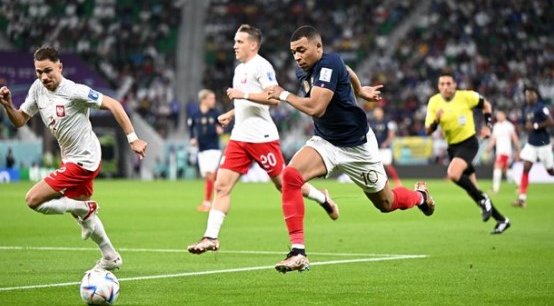 France are through to the quarter-finals of the 2022 Qatar World Cup after eliminating Poland.

Current world champions France took on Poland this afternoon, Sunday, December 4, in Doha’s Al Thumama Stadium. At stake was a quarter-final showdown with the winners of today’s other match between England and Senegal.

Didier Deschamps’ side found it difficult to break down the Polish defence and were continually frustrated. Poland were unlucky not to take the lead at one point. Piotr Zielinski found himself with an opportunity in the penalty area but shot straight at Hugo Lloris.

Olivier Giroud wrote his name in the history books of French football when he opened the scoring in the 44th minute. His 52nd international goal saw him overtake the legendary Thierry Henry as his nation’s top goalscorer.

His historical strike came when the AC Milan forward placed a low shot into the net beyond Polish keeper Wojciech Szczesny after first controlling a pass from Kylian Mbappe.

In the second half, Mbappe took the game by the scruff of the neck and showed why he is such a highly sought-after player. The young French star bagged two more goals to put him in front of the race for the tournament’s prestigious Golden Boot trophy.

Mbappe’s first came in the 74th minute with a scorching drive from 16 yards out, into the top of the Poland net, giving Szczesny no chance. Another curling shot in added time was superb. He has already racked up five goals in four matches.

A consolation goal came via Robert Lewandowski’s penalty kick with virtually the final kick of the game, to at least make the scoreline look better at 3-1.