1,200 university students believed to have been poisoned before anti-regime protests 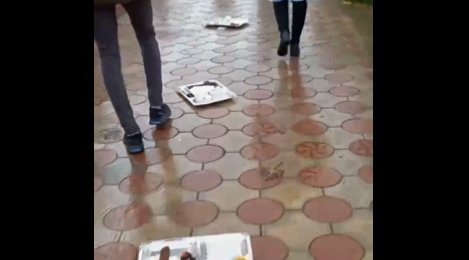 The Iranian news agency ISNA has reported that as many as 1,200 university students could have been poisoned the night before they were due to attend anti-regime protests.

According to the Iranian Science Ministry the students suffered food poisoning. Since the poisoning students have been dumping canteen food onto pavements outside the universities, resulting in row upon row of garbage bags.

Students have blamed the Iranian regime for deliberately poisoning them in an effort to stop their latest protests, however authorities have blamed accidental food poisoning linked to an outbreak of water-borne bacteria in the country.

A statement issued by Iran’s National Student Union said: “Our past experiences of similar incidents at the Isfahan University negates the authorities’ reason for this mass food poisoning.”

The universities affected have told female students to remain in their rooms whilst others claim that the university medical facilities claim to have a shortage of medication and electrolytes, the latter deemed necessary to treat dehydration.

Students at the Sari Agricultural Sciences and Natural Resources University, Mazandaran province, boycotting cafeteria food to protest the recent spate of food poisoning–believed to be intentional–at universities which have protested in Iran. #MahsaAmini #مهسا_امینی pic.twitter.com/znwyzGj7ee

On Monday the call went out for a three-day national strike from Wednesday that after the country claimed to have scrapped its morality police unit.

The official state broadcaster in Iran said: “No official in the Islamic Republic of Iran has confirmed the closure of the morality police.

“Some foreign media have tried to characterise the attorney general’s statement as the Islamic Republic’s withdrawal from its hijab [laws] and influenced by the recent riots.”

The statement by the Attorney General said that the unit would be shut down but did not specify when, but it is now unclear whether it will be dissolved.

The Iranian regime has also targeted sports and other celebrities who have shown support for the protests or who failed to abide by the strict dress codes. That has resulted in their businesses being closed and in some cases their homes demolished.

Many Iranian shops have already chosen to close prior to the demonstrations, which the government have tried to claim is to protect them from, protestors. However, protest organisers, say that the shops are closed in solidarity with 19 cities now supporting the demonstrations.

With no negotiated settlement in sight and no sign of the government relenting protests will continue as will incidences that have seen 1,200 university students claim they have been poisoned prior to anti-regime protests