Portugal destroy Switzerland to progress in the 2022 Qatar World Cup 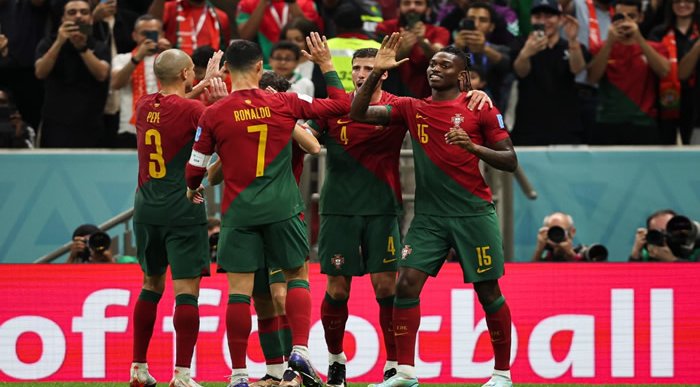 Portugal are through to the quarter-finals of the 2022 Qatar World Cup after destroying Switzerland 6-1.

Portugal and Switzerland faced off this evening, Tuesday, December 6, in Doha’s Lusail Iconic Stadium. At stake for the winner was a 2022 Qatar World Cup quarter-final clash with Morocco who shocked Spain earlier today after a penalty shootout.

The big news going into the match was that Fernando Santos had relegated Cristiano Ronaldo to the bench. In his place, 21-year-old Benfica player, Goncalo Ramos made his international debut. Santos publicly stated that he had been far from happy with Ronaldo’s reaction to being subbed in the defeat by South Korea.

As it turned out, what looked like a monumental gamble turned into an incredible success story with Ramos bagging a hat trick in a 6-1 rout of the Swiss.

It took 17 minutes for Ramos to make his mark. Joao Felix picked him out from a throw-in and next thing, the ball was in the Swiss net from the tightest of angles to make it 1-0.

At the age of 39, Pepe is still playing at the highest level. He proved this by netting Portugal’s second after outjumping the Swizz defenders to power Bruno Fernandes’ corner into the net after 33 minutes.

Ramos was on hand again in the 51st minute to poke the ball home for 3-0 from close range after a lovely cross from Diogo Dalot. Two minutes later it was 4-0 with Raphael Guerreiro producing a thunderbolt into the net courtesy of a Goncalo Ramos assist.

Switzerland managed to claw a goal back in the 55th minute. Manuel Akanji met the ball at the far post for an easy finish.

Goncalo Ramos rounded off a dream debut in the 67th minute, latching onto a ball from Joao Felix before clipping a superb finish over the advancing goalkeeper for 5-1. The rout was completed in added time when Rafael Leao curled a stunning shot around the Swiss keeper.