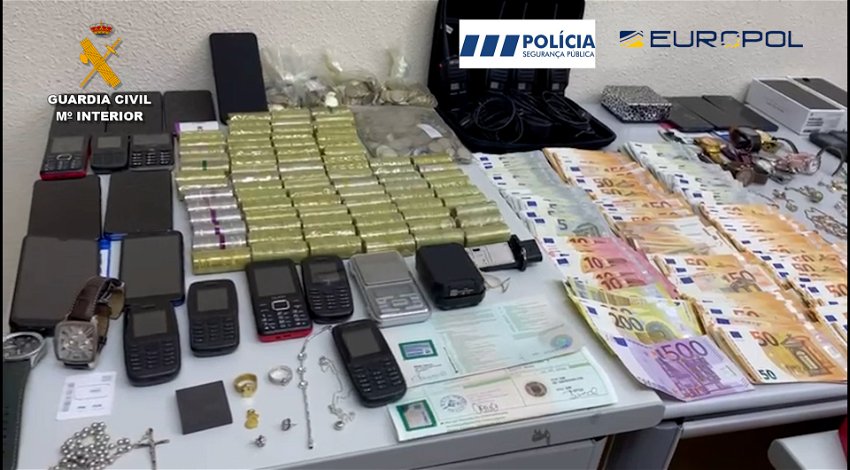 An €800,000 loot of cash and jewellery was seized by Spain's Guardia Civil - photo/Guardia Civil

The Spanish Guardia Civil has today arrested seven members of an Albanian criminal gang thought to be behind more than 40 thefts across Spain, amounting to a confiscated loot of around €800,000.

The seven suspected criminals are said to be behind thefts of large amounts of jewellery, cash and technology in homes across the Spanish provinces of Salamanca, Valladolid, León, Palencia, La Rioja, Navarra and Zaragoza.

The gang were said to have transferred the stolen goods to Albania, having first travelled to the Portuguese capital of Lisbon.

The Guardia Civil’s successful operation to catch the criminals – codenamed Rovisa – was enacted with the support of the Polícia de Segurança Pública de Portugal in addition to police in Albania.

The Rovisa operation began in March, when several robberies were reported in the region of Salamanca in northwestern Spain.

Subsequent investigations found alleged members of the gang were travelling into and out of Spain via the Portuguese capital of Lisbon, where they arrived and returned to Albania from.

Support from both Portuguese and Albanian authorities was requested by the Guardia Civil, and all three forces were coordinated by the European police agency Europol.

Officers discovered the gang had established a base for their operations in the city of Gandia in the eastern coastal province of Valencia, from where they travelled to commit robberies across the country.

The group were also known to regularly change their names to make their detection more difficult, as well as using fake number plates on their vehicles and walkie-talkies instead of mobile phones.

Five properties across Valencia and the capital of Madrid were made by officers, and the seven members of the group were arrested.

Large amounts of jewellery, cash, technology and materials used to commit the robberies were also seized, with a total value of around €800,000.