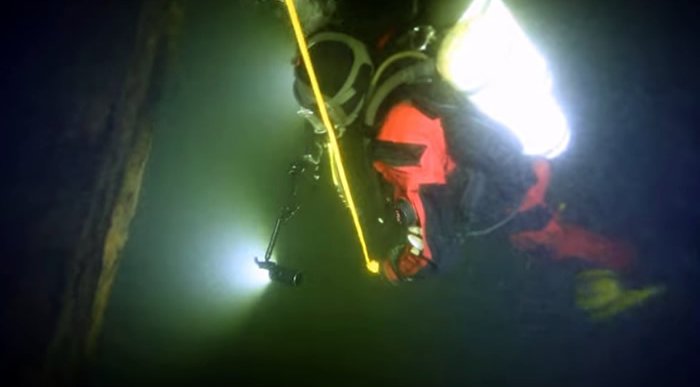 Image of a diver at the wreck of the Applet. Credit: YouTube Stockholm University

Maritime archaeologists discovered the almost 400-year-old shipwreck of one of the largest warships ever built, submerged off the coast of Stockholm in Sweden.

Underwater archaeologists have discovered a long-sought shipwreck on the seabed near the Swedish capital of Stockholm. This is the Applet, almost 400 years old, which was one of the largest warships of its time. She was launched in 1629 and sunk in 1659, according to a statement from Stockholm University.

The team from Sweden’s Vrak Shipwreck Museum believe the remains of a 17th-century warship will provide new insights into both the country’s history and the history of the shipbuilding.

Known as Applet, she was a sister ship to Sweden’s most famous historic warship, the 1,200-ton Vasa, which sank on its maiden voyage in 1628, taking the lives of 30 sailors with it. Launched in 1629, Applet was built by the same shipbuilder as Vasa.

In 1625, King Gustav II Adolf ordered the construction of four warships that would be among the largest ever created and would show the might of Sweden. Two of the ships were to be the largest, the Vasa and the Applet, while the other two were of slightly smaller dimensions.

While Sweden salvaged the Vasa in the early 1960s and built a museum to display it, the Applet was still missing.

According to historians, the shipbuilder Hein Jacobsson suspected that the Vasa had been built too narrow and was therefore likely to be unstable. For this reason, the Applet was built wider, with a slightly different hull shape.

It was completed in 1629 and saw service in the Thirty Years’ War, transporting almost 1,000 sailors and soldiers to Germany, as explained in the trade magazine The Maritime Executive.

Historians consider that after the war it was probably inactive, as its large size made it more difficult to manoeuvre and more expensive to maintain and operate. The Applet was subsequently sunk by Sweden in 1659 to create an underwater barrier to block a possible invasion of Stockholm by sea.

On several occasions, the museum’s maritime archaeologists collaborated with the Navy to survey the area where they believed the Applet sank.

In 2019, the museum’s maritime archaeologists found two shipwrecks at Vaxholm on the island of Vaxon and thought they had finally located the Applet. However, later research showed that they were two smaller ships, dating back to 1648.

The archaeologists continued their search. In December 2021, a large shipwreck was discovered in the strait at Vaxholm. Parts of the sides of this ship had fallen to the bottom of the sea, but the hull was largely preserved. The fallen sides had portholes on two different levels, evidence that it was a warship with two gun decks, dedicated to mounting cannons, the aforementioned magazine highlighted.

In the spring of 2022, a second, more comprehensive inspection was carried out. During those dives, details of the ship that had hitherto only been seen in Vasa were found, and various samples and analyzes were carried out. The oak for the ship’s timber was determined to have been felled in 1627 at the same location as the Vasa timber only a few years earlier.

Measurement data, technical details of the ship, wood samples, and archival data ultimately confirmed that it was Vasa’s sister ship, the Applet.

Unlike the Vasa though, the Applet cannot be recovered and will remain on the seabed. The museum team is still confident that their analysis will help to better understand how large warships evolved. From the unstable Vasa to the marine giants, they had been built so that they could control the Baltic Sea.

The ship that has been found and identified is a unique find, but it is just one of the hundreds of ships being mapped within The Forgotten Fleet research programme. They use archaeological surveys, archival surveys, and digital tools for this end, Stockholm University concluded.