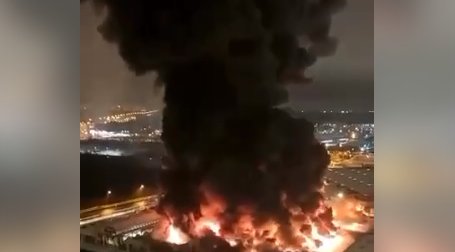 07:31 (December 9) – A fire has broken out in a shopping centre on the road from Moscow to St. Petersburg, with emergency services on the scene working to extinguish the flames.

According to Russian news site Kommersant the fire began in the OBI hypermarket early this morning spreading across the 18,000 square metre facility.

Wow! That fire at the shopping centre on the outskirts of #Moscow escalated quickly.

One whole side of the Mega mall in #Khimki was wiped out when something exploded inside.

Fire fighters continue to battle the flames, with efforts hampered by the design of the shopping centre as well as the roof which has collapsed. Some 5,000 square metres of the roof has fallen in so far with more expected to collapse the longer the fire continues.

So far one person has been reported dead, however the emergency services do not know who was in the building at the time. They also do not know what caused the fire but that chemicals and aerosols sold by the OBI store had exploded spreading the flames.

“Clink! This is a fire! ”: Burning in an area of ​​​​7 thousand meters, roof collapse and even an explosion in the OBI hypermarket in the Mega Khimki shopping center, which, apparently, no longer exists. #Moscow pic.twitter.com/Yi1gPhhC1Q

The Ministry of Emergency Situations told Interfax that a short circuit in the power grid could have been responsible for starting the fire, but they have not ruled out arson.

The authorities have started an investigation into the fire at the Moscow shopping centre that has destroyed the entire 18,000 square metre facility.