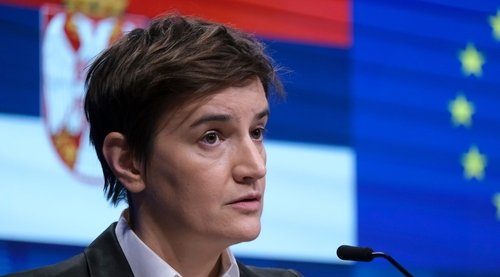 The Prime Minister of Serbia has warned that the country is on the brink of war because of tensions between Serbs and Albanians fanned by Kosovo.

Serbian Prime Minister Ana Brnabic was speaking on Friday, December 9 at a press conference in Belgrade.

She said that the Prime Minister of Kosovo Ana Brnabic was behind the rise in tensions, adding that the European Union were doing little help the situation.

“Albin Kurti brought all of us, Serbs and Albanians, to the very edge of the war, but he did not do it alone.

“We note the completely ignorant behaviour of partners and the European Union, which do not react or react when it is already “completely on fire.”

She was critical of the lack of action taken by the EU special mission, EULEX, in Kosovo, as she was the international NATO force KFOR. Both these organisations are responsible for maintaining peace and stability in Kosovo.

Brnabic  added: “They do not protect the Serbs in Kosovo and Metohija.”

The press conference follows yesterday’s reports that special forces from Kosovo had arrived in the Serb-populated city of Kosovska Mitrovica. They are believed to have since moved further north to the Bošnjačka Mahala area.

Kosovan police have confirmed the increase in the number of officers in the northern part of the republic, which they say is to “ensure the safety of all citizens.”

Agreements reached in Brussels between the two requires Kosovo police to only enter Serb-populated areas where permission is granted by the heads of the four Serbian municipalities.

Petar Petkovic, who heads the Serbia Government office for Kosovo and Metohija has threatened to send 1,000 troops into the area if the Kosovan police do not withdraw.

With tensions in the region already high calm heads and negotiation will need to stop Serbia, which says it is on the brink of war, taking action to defend Serbs in Kosovo.