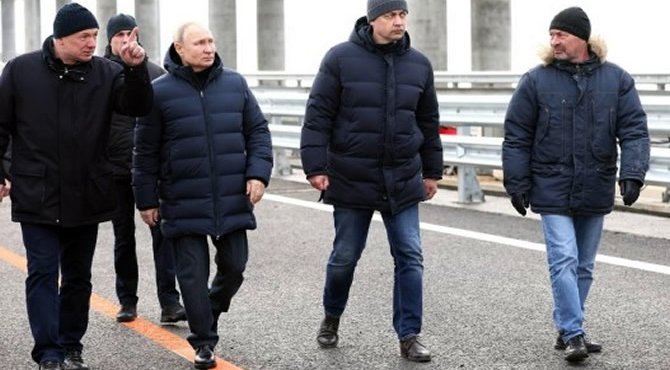 Russian President Vladimir Putin is reportedly  to undergoing surgery after he slipped down the stairs in his Moscow home.

The Telegram channel General SVR reported on Friday, December 9 that he is to undergo a minor operation after he damaged hi coccyx.

The reports have, however, been denied by the Kremlin who have stepped up his security detail amidst fears of an assassination attempt.

He was seen walking unaided down the stairs of his aircraft in Bishkek, the capital of Kyrgyzstan, for a meeting of the Eurasian Economic Union. Onlookers say that he was walking “gingerly” suggesting there may be some truth the story.

Putin is said to be followed by an aide who keeps a small rucksack with him at all times, the rucksack believed to contain body armour in the case of an attempt on his life.

SVR said: “Putin will have a simple surgical operation. The fall from the stairs last week, which resulted in a bruised tailbone, which we talked about, did not go unnoticed and caused new problems not directly related to the bruise.”

Despite numerous claims from a variety of sources that Putin is suffering a number of ailments, the Kremlin continue to insist that he is in good health.

SVR has also claimed that Putin will be moving his annual New Year’s celebrations in a secure venue east of the Ural Mountains, given the assassination fears. Normally he would have spent the time in Sochi on the Black Sea.

Russians do not mark Christmas on December 25 but have a break over New Year and then celebrate the Orthodox Christmas Day on January 7.

Should the rumours be true regarding the need for Vladimir Putin to undergo surgery, it would seem that it is a minor procedure and not one for concern.