Irish and Denia boxers raise €15,000 in a spectacular night’s entertainment 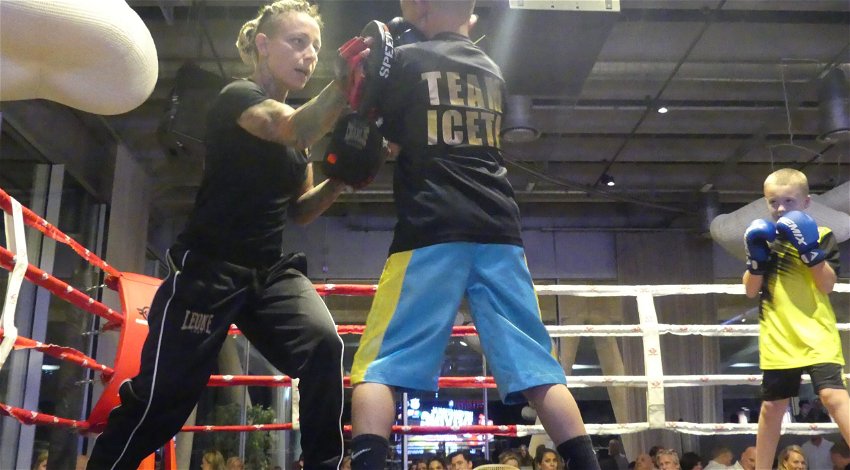 Residents of La Marina were treated to a spectacular and very professionally organised night’s entertainment with 12 amateur boxers and their handlers travelling from all over Ireland to take on local talent.

The evening was held in Balearia’s Multiespai L’Androna overlooking the Port of Denia on Friday, December 9, with 12 boxers that had travelled from all over Ireland making the trip.

To kick the evening off Brennan displayed some of the local young talent with two very capable eight-year-olds being put through their paces with their trainer.

That was followed by a presentation of two cheques each valued at €7,500, the proceeds of the evening, being handed over by Aart Jan Dross to Extiende Tumano and APAD. The two excellent charities are involved in helping the needy and in caring for dogs respectively.

A four course meal was then served to the 100 or so guests who had booked for dinner, whilst the remaining 150 or so spectators were able to buy drinks, snacks and sandwiches.

Whilst dinner was being served the fun began with the boxers pitting their skills in what turned out to be very evenly matched bouts. The spoils were shared between the local and Irish boxers, with the highlight of the evening being the win by Aymara Comargo in her first ever bout.

Aymara’s brother, a promising professional, was killed not long ago when he was knocked off his bicycle. That death led his father Marcelo and Paddy Brennan to set up the boxing club in Denia.

A fantastic evening that was very professionally put together and which it is understood will feature in a Channel 4 documentary. Congratulations has to go to the boxers, handlers and referees first and foremost.