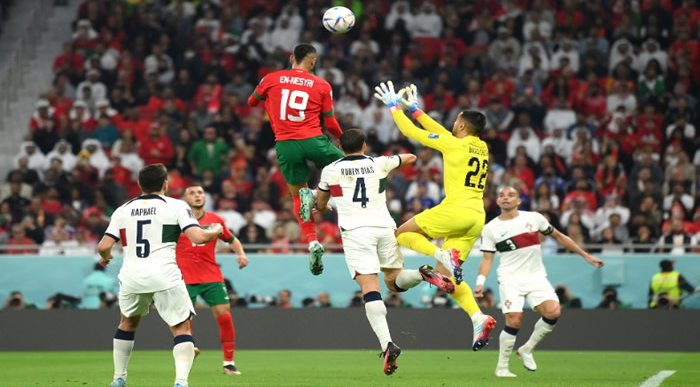 Portugal have been knocked out of the 2022 Qatar World Cup by Morocco who become the first African nation to reach a semi-final in the tournament’s history.

Portugal faced off against Morocco today, Saturday, December 10, in the third quarter-final of the 2022 Qatar World Cup. The volume inside the Al Thumama Stadium in Doha was deafening with the North African fans hoping for another huge result.

The prize at stake was a semi-final with either England or France who play later this evening. Should Morocco win they would become the first African nation to ever reach the last four of a World Cup tournament.

When Youssef En-Nesyri rose to head the ball home in the 42nd minute from Yahya Attiyat-Allah’s cross, a shock result was on the cards again. The striker beat the Portuguese defenders to power the ball beyond Diogo Costa.

Portuguese captain Bruno Fernandes was presented with a golden opportunity to level the scores just minutes later but his effort hit the bar.

Yassine Bounou saved his country in the second half when he tipped a fierce shot from Atletico Madrid’s Joao Felix over the bar.

Cristiano Ronaldo was once again left on the bench but he entered the fray after 50 minutes for his 196th international cap. In the process, he equalled the men’s record for the number of appearances. His introduction though did nothing to inspire his side as the Moroccans held out admirably and were by far the better team, with incredible organisation.

A silly tackle by Walid Cheddira in the dying minutes saw the striker receive his second yellow card and now he misses the semi-final. This only adds to Morocco’s growing list of missing players through injury. With a full side free of injury, one wonders just how good they really would be.

This side will definitely take a good team to beat it on this performance. They seem to be getting better with each match they play. Playing France or England next will be a real test of their stature.