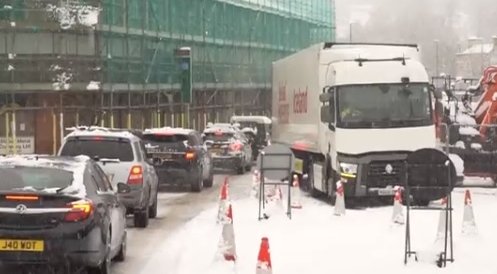 The UK has recorded its coldest night of the year with countrywide snowfalls causing schools to close in many areas and resulting widespread travel chaos.

Authorities have issued countrywide warnings for adverse weather conditions on Monday. December 12 with people asked only to travel where necessary.

The request comes the day after the coldest night of the year with temperatures falling below zero across the country. Braemar in Scotland recorded the coldest conditions with the temperature falling to minus 15.7C.

With the demand for heating rising fast the National Grid have said that they are in the process of warming up two coal fired plants in an effort to cope with the increased demand. They have also said they are running a fifth blackout prevention test to ensure that the system can cope with the expected demand this week.

He added: “We have asked the two coal plants to warm, which is putting them on standby in effect, in case we need to use them this evening.

“it is not a sign the lights are going to go out, so we are really reassuring on that.”

Continuing he said: “We are nowhere near” temporary controlled blackouts” but encouraged people to not use “energy-hungry” devices during peak times if possible. They also reminded people to keep items like heating at a sensible temperature and not to turn the heat up as that will place strain on the system, as well as push energy bills sky high.

According to Octopus Energy, whose customers have been taking part in the blackout prevention sessions, said more than £1 million has been paid to customers over four hours’ worth of “Saving Sessions.”

With another cold night expected after the UK records the coldest night of year, authorities have asked people to do what’s necessary to keep warm but also to be mindful of the need to keep consumption down during peak hours.