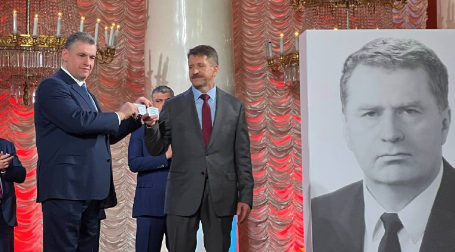 RUSSIAN arms dealer Victor Bout, who was recently returned to Russia in exchange for US basketball star Brittney Griner, has joined the Liberal Democratic Party of Russia (LDPR).

Victor Bout, who voiced support for Vladimir Putin’s invasion of Ukraine while slamming the West’s ‘suicide of civilization’, joined the LDPR three days after his return to Russia.

According to Russian state-controlled media outlet RIA on Monday, December 12, Bout was personally handed his party card by LDPR leader Leonid Slutsky on the stage of the Column Hall of the House of Unions during a rally marking the party’s 33rd anniversary.

In a video posted on Telegram, LDPR leader Leonid Slutsky, standing on a stage beside Bout, said: “I want to thank Viktor Anatolievich (Bout) for the decision he has made and welcome him into the ranks of the best political party in today’s Russia.

“We are the party of patriots! I am sure Viktor Bout is a strong spirit and courageous man and will take his rightful place in it. Welcome to the party!”

As noted, Bout wasted no time voicing his full support of Vladimir Putin’s invasion of Ukraine.

During an interview with RT on December 11, he said: “I fully support, if I had the opportunity and the necessary skills, I would, of course, volunteer”. At the same time, he described the events currently unfolding in Western countries as the ‘suicide of civilization’.

The man once dubbed the ‘Merchant of Death’ claimed that the judge who announced his verdict in an American court admitted that he was a ‘normal businessman’ who had not done anything illegal, according to dailystorm.ru.

On December 8, Bout, who had been serving a 25-year sentence in the United States on charges of arms trafficking, was exchanged for Griner. The basketball star had been sentenced to nine years in prison in Russia for drug smuggling. Their swap took place at the airport in Abu Dhabi.