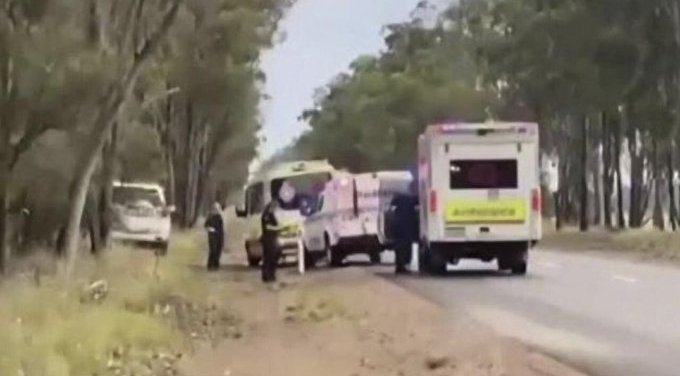 07:04 (December 13) – A follow up operation to trace and bring the killers of the two young police officers shot dead in Queensland, has resulted in four more deaths.

A follow up operation resulted in a stand off between the shooters and the police that lasted more than six-hours. An ensuing shootout  resulted in the the two suspects being killed, Gareth Train, his partner and his brother.

It is now also known that a resulting in a good Samaritan neighbour, Alan Dare, who went to the aid of the two young police officers killed in the original shooting, was also gunned down taking the death toll to six.

Train has since been identified as a conspiracy theorist who hated the police and who believed the Port Arthur massacre was a “false flag operation.” He also believed that the government were running re-education camps.

One of the Queensland shooters, Gareth Train, appears to have a pretty prolific comments presence around Australian conspiracist and sov cit sites.

The shooter in the Port Arthur massacre, Martin Bryant, killed 35 people and wounded 23 others, in the worst massacre in modern Australian history.

Queensland Police Commissioner Katarina Carroll confirming the death of the suspects said: “a lot of ammunition and weaponry had been found at the address.”

Train’s brother Nathaniel, who police were looking for after he went missing, was once a respected school principal while his wife was  Stacey Jane Train was listed as the Head of Curriculum at nearby Tara Shire State College as recently as 2019.

16:45 (December 12) – Three people have died in an ambush in Queensland, Australia with two police officers and one assailant dead.

According to News Australia the shooting took place on Monday, December 13.

A manhunt is now said to be underway to find the remaining assailants after the two police officers were killed in what looks like an execution-style murder.

The two officers in their 20’s were gunned down after being ambushed on a man’s property in Wester Darling Downs about three hours from Brisbane. The 26-year-old woman and 29-year-old man were seen being approached by two people in camouflage gear before being shot in cold blood. 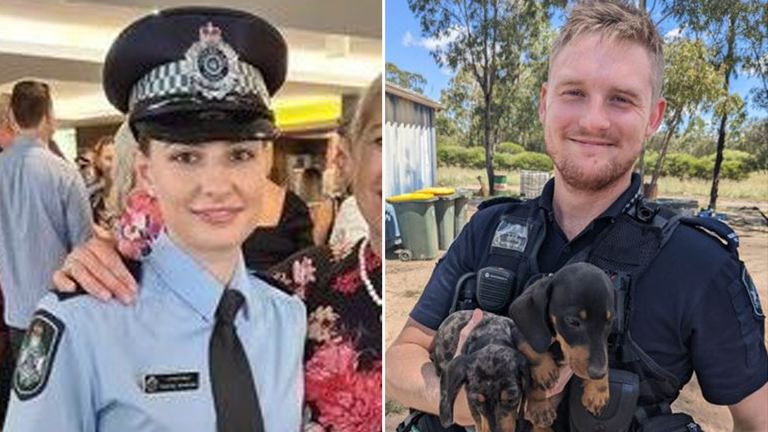 A witness reported seeing the suspects remove the police officer’s weapons before fleeing the scene.

QLD Police Commissioner Katarina Carroll confirmed the shooting and the deaths saying: “It is with deep sadness that I confirm the deaths of three people, including two officers, during an incident in the Western Downs late this afternoon.

“Four officers attended a property on Waynes Road in Wieabila in relation to a reported missing person from New South Wales. Tragically, while in attendance, two officers were shot and declared deceased at the scene.

A fourth young female officer fled into the local bush to get away from the shooters, who then set fire to the surrounding area in an effort to flush her out. She was rescued shortly afterwards by a 16-strong extraction team of police who also ­recovered the bodies of the two murdered officers.

Police have declared an emergency declaration under the Public Safety Preservation Act (PSPA) in relation to an ongoing incident at Wieambilla.https://t.co/nh7v08kLs0 pic.twitter.com/MU4LvjGdth

Carroll said they were at a loss to understand what went on and that police have “yet to learn the full extent of what has occurred today” and described the incident as “extraordinarily distressing on many levels.

“I extend my heartfelt condolences to officers’ families, friends and colleagues,” she added.

“Our thoughts are with them during this extremely difficult time. Those officers paid the ultimate sacrifice to keep our community safe.

“I would like to also pay tribute to all police and first responders who assisted at the scene and are continuing to respond this evening.

“Tragically this is the largest loss of life we have suffered in one single incident in recent times.”

The manhunt is still continuing with residents in the area told to stay indoors with police saying: “Residents within the declared areas must remain indoors until further notice, and motorists and pedestrians are advised to avoid the area.”

At least two police officers are feared dead after an execution-style shooting in Queensland that wounded another officer and left a fourth missing.https://t.co/WLd5LR6Xby pic.twitter.com/lCz6kHzk7f

The town itself is small with only around 100 residents who are shocked by what happened, particularly as the police say they were attending a missing person search after a request was received from NSW police.

The ambush that has left two police officers and one man dead has caught the local police off-guard in an area not known for this type of violence.