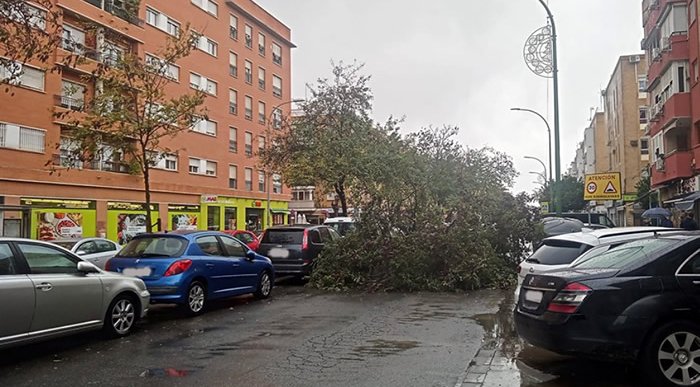 More than 400 incidents have been dealt with today, Tuesday, December 13, by Emergencies 112 Andalucia.

As reported this evening, Tuesday, December 13, by Emergencies 112 Andalucia, the coordination centre has dealt with almost 400 incidents between 00.01am and 6pm. Most of these were caused by the heavy rain and strong winds that are affecting Andalucia

The emergency services were deployed to handle falling trees, branches, tiles, rubble, cornices, elements of street furniture, and even Christmas decorations. Noteworthy is the fall of a large branch that injured two men in the Cadiz municipality of San Fernando.

Rockfalls occurred on some regional roads in Jaen province while streets and houses were flooded in the towns of El Ronquillo and La Puebla de los Infantes in Sevilla, Montoro in Cordoba, Cordoba capital, and Minas de Riotinto in Huelva.

Sevilla province registered the most emergencies with more than 120 coordinated incidents, mostly in the capital. Several trees fell on public roads in Calles Avenida de las Ciencias and Campo de los Martires, without any injuries.

Notices have also been received from different parts of the province, including Alcala de Guadaira, Dos Hermanas, Los Palacios, Arahal, Palomares del Rio, Ecija or Mairena del Aljarafe. In the latter, firefighters were dispatched to deal with the detachment of a cornice from an institute. Thankfully, no injuries resulted.

The province of Jaen recorded some sixty incidents caused by strong gusts of wind. In the capital, they experienced fallen tree branches, blinds and building tiles, among other elements. Among the most notable incidents was that of a tree crashing down on top of a car in the capital. A large pine tree also fell in Segura de la Sierra.

Stones also fell from the wall of Isnatoraf castle, although without causing injuries. The area has since been cordoned off by the Local Police.

In Huelva, some thirty incidents were recorded, the majority also due to the wind. Rail traffic was cut by a landslide on the tracks near Almonaster la Real, on the line from Huelva to Zafra. Rainfall in Aracena caused leaks in a school resulting in students slipping over which saw the facility closed on the instruction of the Delegation of Education.

In Cordoba, some 80 emergencies related to registered gusts of winds were dealt with, all in the capital. Several palm trees were blown over on Avenida de Granada and trees on streets such as Escultor Fernandez Marquez, Avenida Cañito Bazan, Manzanos in Trassierra, and Glorieta Amadora. No injuries were reported.

The provinces of Cadiz, Granada, Almeria and Malaga are the ones that registered the fewest incidents so far today. There were approximately 20 in each region. Emergency operations were executed for fallen branches, trees, tiles or elements of street furniture.

These occurred in the municipalities of Jerez de la Frontera in Cadiz, El Puerto from Santa Maria, and Algeciras. Similar incidents were handled in Roquetas de Mar and the capital of Almeria. In Malaga, there were incidents in Alhaurin el Grande, Marbella, and Igualeja.