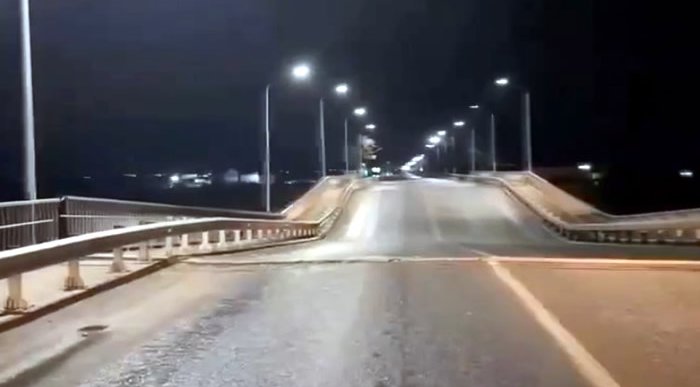 Image of the bridge on the outskirts of Melitopol. Credit: Telegram Vladimir Rogov

One section of a strategic bridge located on the outskirts of the Russian-occupied city of Melitopol was destroyed by Ukrainian saboteurs.

A road bridge was blown up on the outskirts of the Russian-occupied Ukrainian city of Melitopol on Monday, December 12. The first reports blamed a hit from HIMARS but local authorities later started talking about the possibility of explosives being planted by saboteurs at the base of the structure’s supports.

Aleksey Arestovich, an adviser to the office of the President of Ukraine, called it an attack on “‘the theatre of hostilities’. We do not give them the opportunity to transfer weapons and military equipment in a timely manner. Now they will have to take a detour, and this is very good because the modern war is not about tons, but about rhythms”, he said.

Ukrainian media and military correspondents believe that the attack on the strategic landmark is connected with the upcoming offensive of the Ukrainian forces in the Zaporizhzhia region.

Vladimir Rogov, the chairman of the ‘We Are Together with Russia’ movement reported the incident on his Telegram channel. “It’s loud in Melitopol! Around 21:35pm, two powerful explosions were heard in Melitopol and the nearest suburbs”, he posted, promising to provide more details later.

Similarly, other Telegram channels began reporting that a bridge in the village of Konstantinovka, an eastern suburb of Melitopol, had been attacked by the Ukrainian military using HIMARS missile systems, as reported by gazeta.ru.

However, a little later, Rogov denied the missile attack, insisting instead that the bridge in Konstantinovka was damaged as a result of sabotage. “Information about the strike of the MLRS on the bridge in Melitopol is not confirmed. According to preliminary data, UGIL ‘terrorists’ planted explosives near the bridge support”, Rogov wrote.

Rogov explained that the ‘terrorists’ chose the bridge as their target in order to disrupt the supply of vital goods to the liberated territories of the Zaporizhzhia and Kherson regions, including food, medicine, and building materials.

He also posted several videos showing the sound of the first explosion and then showing the state of the bridge. Judging by the footage, at least one span of the road crossing was destroyed as a result of the explosion. According to the WarGonzo Telegram channel, one of the bridge slabs ‘dived’ down, but the road surface on it was not damaged.

In the pro-Ukrainian Telegram channels, the bridge connecting Konstantinovka and Melitopol is regarded as one of the most important transport facilities in the region. Russian troops transport military equipment along it, among other things.

Later, the Zaporizhzhia authorities confirmed information about the damage to the bridge o RIA Novosti. Its very design withstood the explosion, but the roadbed seriously subsided. The administration also said that, according to preliminary information, explosives planted at the support were the cause of the incident.

The administration of Melitopol reported that the piers of the bridge were damaged as a result of the explosion. At the moment, traffic on it is suspended and operational services are working at the scene.