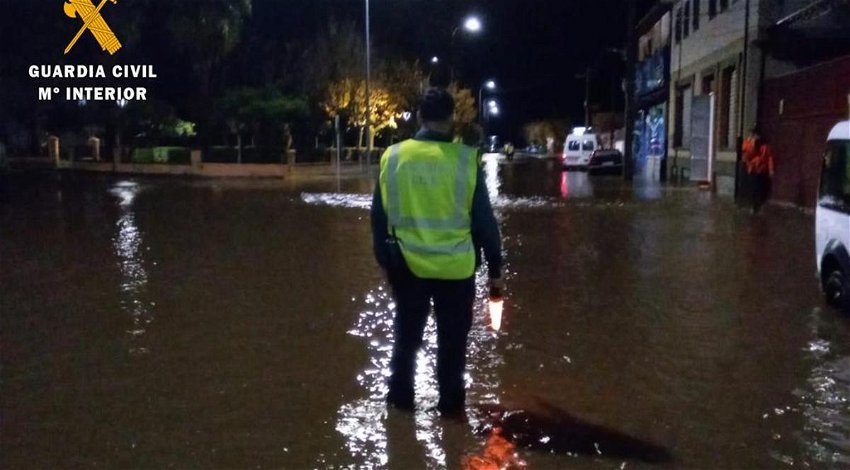 14:31 (December 13) – An emergency situation has been declared in Extremadura after heavy rainfalls of up to 100 litres per square metre, fell this morning.

As a result of the flooding the special civil protection plan for flood risk has been implemented.

Many of the roads in the community have been cut off and emergency services have registered more than 500 calls for assistance.

The areas that are at biggest risk at the moment are La Roca de la Sierra (Badajoz) and Cáceres, where water levels are rising.

The regions of Las Vegas del Guadiana in Badajoz, and the Cáceres in the north of the province, and Villuercas-Montánchez are on orange alert for rains, and the rest of the region in yellow warning.

By Tuesday 2pm the following towns had experienced heavy rainfall including Navalvillar de Ibor in the Villuercas of Cáceres, 72 liters per square meter have been collected, 54 in Puebla de Obando, Badajoz, an area where the Cáceres-Badajoz road has been cut, and 50 liters in the three main cities of the region: Badajoz, Cáceres and Mérida.

Cáceres, in the northwest of the province received 90 litres per square metre yesterday.

The area along with remaining central and eastern parts of the country will continue to receive rain for the remainder of the week.

10:03 (December 13) – A weather warning has been issued for rain on Tuesday, December 13 with possible record rainfalls in the Madrid Community.

The heavy rain is expected to pass through central parts of the country and into the east through the Valencian Community and into the Balearic Islands.

Storm Efrain has prompted the Security and Emergency Agency of the Community of Madrid (ASEM 112) to activate the pre-emergency situation of the Special Civil Protection Plan given the high possibility of flooding.

The plan is only implemented where there is a possibility of damage to property and life, with authorities warning drivers tobe cautious on the road. They are asking everyone to reduce their speed, to use their headlights and to increase the distance between cars.

If it is necessary to stop on the road shoulder hazard lights should be used.

A number of parks in the community will remain closed today with as much as 50mm of rain expected, surpassing the city of Madrid’s previous record of 41.5mm recorded on December 19, 1971.

Elsewhere the rain will be moderate with localised heavy downpours as the storm moves across the country. More rain can be expected throughout the week as the storm makes it way with meteorologists suggesting that it will begin to clear in time for the weekend.

Portugal will also be badly affected by the heavy rains with as much 160mm falling in the area.