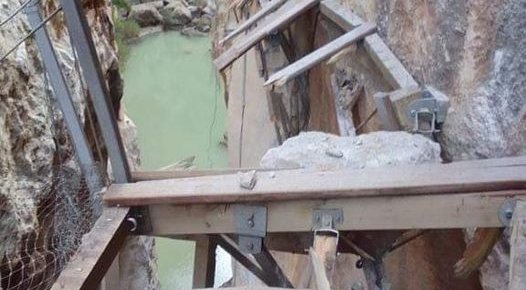 THE Caminito del Rey in Andalucia’s Malaga will remain closed until Friday, December 16 due to the destruction of a 20-metre section of the wooden walkways at the beginning of the route, at the north access, due to landslides caused by the rains.

Malaga’s Caminito del Rey had been forced to close due to maintenance on the wooden walkway after landslides destroyed a 20-metre section on Tuesday, December 13.

Images have emerged on social media of the now-destroyed walkway which was devastated by landslides that occurred at around 11.18 pm on Monday, December 12.

The President of Málaga County Council, Francisco Salado, explained that the last inspection of the footbridges and the area of El Caminito, as it is done on a weekly basis, was carried out last Wednesday.

He added that the landslides were caused by natural causes, as a consequence of the rains in the last few days, which made the slope in front of the path unstable.

The Caminito del Rey is a step built into the walls of the Gaitanes gorge, between the municipalities of Ardales, Álora and Antequera, in the province of Málaga, an autonomous community of Andalucia, Spain.

It is a pedestrian walkway of more than three kilometres (in addition to 4.8 kilometres of access), attached to the rock inside a canyon, with sections barely one meter wide, hanging up to 105 meters above sea level. the river, in walls that become vertical.

The Facebook account AZ Costa de Sol shared a picture of the destroyed footbridge alongside the caption: “The storm that is hitting most of Andalusia has left a part of the Caminito del Rey. It will remain closed for several days and luckily, when the incident happened, it was closed due to the wind.”

Tomy GR shared the photo on Twitter with the caption: “The footbridge of the famous #CaminitoDelRey in Malaga has suffered serious damage after a landslide of large rocks. It is now impossible to walk on it.”