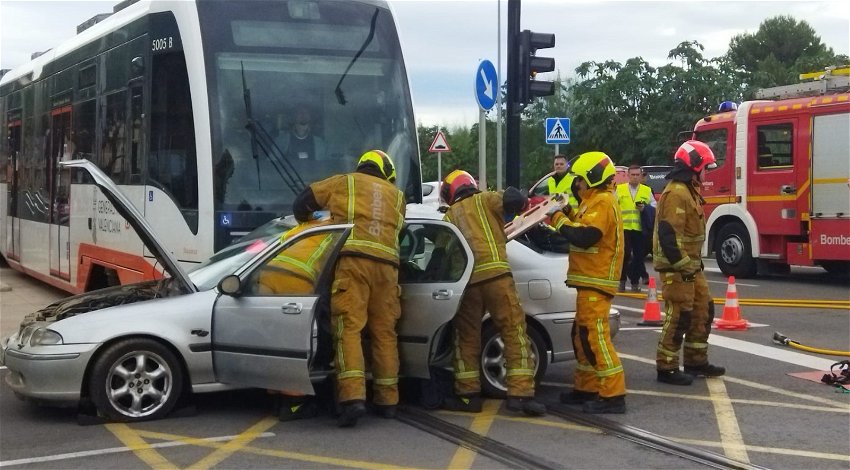 SHOCKING footage of a tram crashing into a car in Costa Blanca North’s Denia is currently circulating online after an incident earlier this week.

While carrying out necessary tests ahead of the launch of line 9 between Denia and Gata, a village in the Marina Alta region of the north Costa Blanca (Spain), a tram smashed into a moving car on its way through the Joan Fuster avenue in Alicante’s Dénia.

However, no one was hurt in the incident – as it was a planned simulation!

According to Ferrocarrils de la Generalitat Valenciana (FGV), the simulation was part of a series of tests the tram, and the company TRAM d’Alacant, need to go through in the days leading up to the launch of the tram line.

The simulation took place at around 11 am on Tuesday, December 13 at the roundabout at the intersection of Joan Fuster, Avinguda Juan Chabàs and Carrer Túria.

A car travelling over the line just as the tram arrived was smashed into by the public transport vehicle which set into motion the next series of events in the simulation.

Next to be involved as part of the training scenario was an ambulance, which arrived on the scene followed by several vehicles from the Fire Brigade and the Dénia Local Police.

As noted by the FGV, the test simulation comes ahead of the resumption of service on the line which is scheduled for the beginning of 2023.

An official statement regarding the simulation was released by the FGV and TRAM d’Alacant, which read: “The aim of this action is to know the internal and external response capacity in the event of an emergency; to check the procedures of the Self-Protection Plan; the coordination between the different departments involved in FGV and the correct coordination between the different external assistance services.

“The simulation consisted of a train of the new 5,000 series (electro-electric) running on Line 9 of the Alacant TRAM between Dénia and Teulada, at the traffic light junction with the roundabout located on Avinguda Joan Fuster at the junction with Avingudes Juan Chabás and Carrer Túria, when a vehicle was blocking the train’s path.

“The train was carrying 15 people, one of them with a wheelchair. In addition to the driver, the vehicle involved in the collision had a passenger. The driver also suffered a collision that prevented him from moving and opening the doors. The driver calls the technician at the command post and informs him of what has just happened. The protocol established in the Self-Protection Plan is then implemented from the Command Post.”