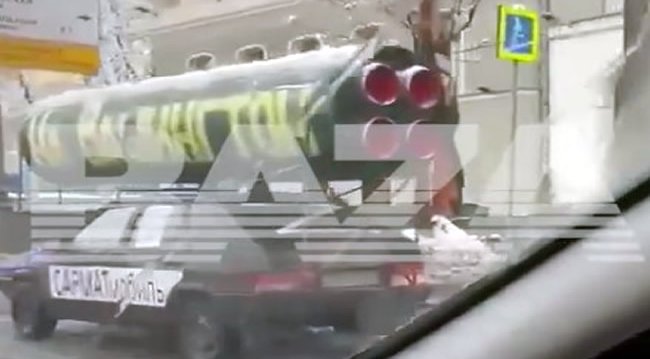 Police officers stopped a ‘Sarmatmobile’ outside the U.S. Embassy in Moscow with a model missile fixed on its roof with the words ‘To Washington’ written on it.

In an incident that occurred in Moscow on Tuesday, December 13, on the Garden Ring, traffic police officers stopped the ‘Sarmatmobile’. This was a car being driven by Ravil Garifullin, an activist belonging to the National Liberation Movement (NOD), which uses the slogan ‘ we are for nuclear deterrence’.

On the roof of his car, Garifullin had fixed a model of a Sarmat missile, emblazoned with the letter Z and the slogan ‘To Washington’. He had driven from Kazan in Tatarstan, and claimed that his intention was to ‘shape public opinion’. The action attracted the attention of a large number of media.

Interviewed by gazeta.ru, a NOD member stated that the police did not issue the driver with any fine. “It happened in front of the U.S. Embassy. ​​I was driving along the Garden Ring and they stopped us to inform us where we could and could not drive”, they told the publication.

The police officers allegedly simply informed Garifullin that there are strategically important roads on which one should not travel with such a ‘dangerous cargo’. “Therefore, they informed me that it was impossible to drive the vehicle along Sadovoye and along the central streets, where executive cars drive directly”, he detailed.

He added that he will be “driving in a circle along the third transport ring in a ‘Sarmatmobile’, while other drivers stop and take pictures”.

Telegram channel Baza reported about a ‘Sarmatmobile’ being stopped on the Garden Ring on December 13. “The ‘sarmatmobile’ with ‘To Washington’ was stopped in Moscow. If you haven’t quite figured out what’s going on, neither have we. In fact, the sarmatmobile arrived in Moscow from Kazan”, they wrote.

Baza continued: “The organisers of the rally said they were going to the capital to shape public opinion – ‘our enemies are awake and bombing our territories’. The rally did make it to Moscow, but the driver had difficulties there – the sarmatmobile was stopped by traffic police inspectors. Now the rocket will fly to Washington only if the police allow it”.

Garifullin had a large pipe about five meters long and about a meter in diameter fixed on the roof of the VAZ-2109. It was painted green and had rocket nozzles painted with yellow paint and the words ‘To Washington’. A banner with the name of the model of the RS-28 rocket ‘Sarmat’ pasted on it was also fixed along the side of his car.

The RS-28 ‘Sarmat’ is the latest Russian silo-based strategic missile system with a heavy intercontinental ballistic missile. It is capable of carrying nuclear warheads.

According to experts, ‘Sarmatians’ can easily overcome the US missile defence system. They achieve this by flying around the Earth over the unprotected South Pole, as opposed to going over the North Pole which is protected by American defence systems.