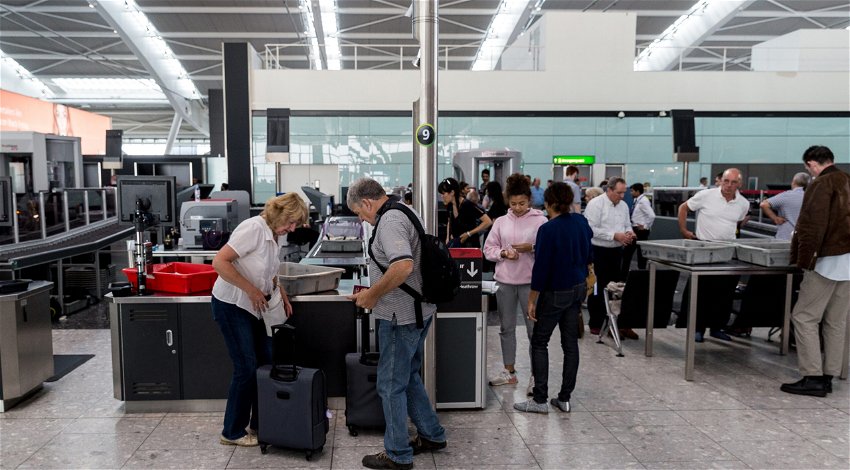 THE UK has announced some major rule changes for airports across the country, as reported on Thursday, December 15.

According to the UK government, “passengers are set to benefit from the biggest shake-up of airport security rules in decade”, which involves taking liquids and large electrical items through airport security.

“The rules around taking liquids and large electrical items through airport security are set to change by 2024 with the installation of new technology at major airports across the UK,” it said on December 15.

“Over the next two years, most major airports will introduce cutting-edge systems into their security checkpoints, ushering in a new era of improved security and passenger experience when going through departures.”

It added: “Not only will it mean greater convenience for travellers – as people will no longer need to spend time taking items out of their bags – but it will also enhance passenger safety, as security staff will have more detailed images of what people are carrying.

“The government is laying new legislation which will make it easier to streamline the processes that apply to UK airports in the future.

“By allowing us to take advantage of the latest advancements, such as developments in screening technology, it will help us to further improve the already high-security standards in the UK.”

“By 2024, major airports across the UK will have the latest security tech installed, reducing queuing times, improving the passenger experience, and most importantly detecting potential threats.

“Of course, this won’t happen straight away – this is going to take 2 years to be fully implemented. Until then, passengers must continue following the existing rules and check before travelling.”

Currently, passengers are required to remove tablets, laptops and liquids from their cabin baggage, while liquids have been limited to 100ml and must be in a clear plastic bag. This requirement will eventually be lifted, and the 100ml liquid container limit will be extended to 2 litres.

“Airports now have until June 2024 to upgrade their screening equipment and processes,” the UK government said.

“Until then, passengers must follow the same rules as now until further notice or unless told otherwise. Crucially, they should check with their specific airport before travelling to see which rules are in place.”

It added: “They should also check the rules for carrying liquids at any airport through which they may transfer during their journey and at their return airport, as many destinations may not have implemented this new technology.”

Christopher Snelling, Policy Director at The Airport Operators Association (AOA), said: “This investment in next-generation security by the UK’s airport operators will provide a great step forward for UK air travel, matching the best in class around the world.

“It will make the journey through the UK’s airports easier and air travel itself more pleasant.”

The statement continued: “The new deadline follows several trials conducted at some airports since 2018, which have demonstrated the effectiveness of this new screening equipment – which uses CT X-ray technology to essentially provide a 3D image of what’s in passengers’ bags, as well as deploying highly advanced threat detection algorithms.

“Similar technology is taking place in many countries globally, with airports such as Schiphol and in the US now also making use of the technology.

“It will further enhance our airports’ ability to detect prohibited items but with greater convenience for passengers.

“The current liquids rules, which were introduced in 2006 following a terrorist threat, have been designed to stop those with hostile intent carrying liquid explosives onto planes.”