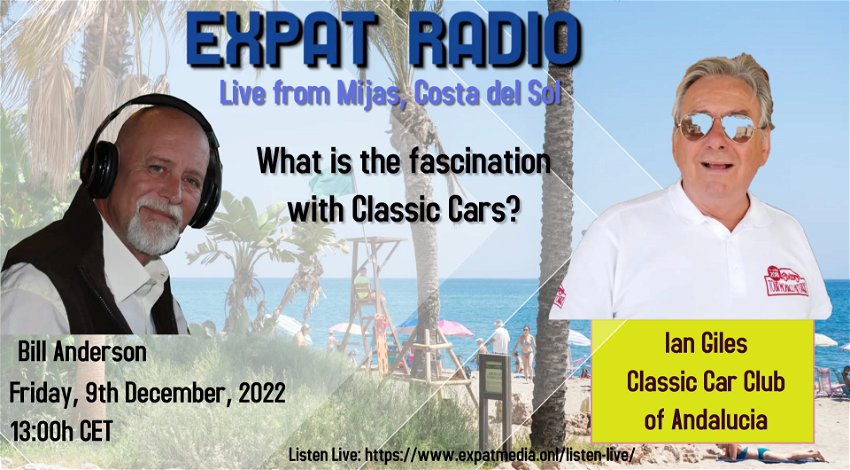 Ian Giles was born in Gwent but grew in Weston Super Mare which he fondly refers to as “God’s waiting room”. He was born to drive and participated in his first Rally at the age of 12, albeit in the back of a Cortina GT.

His first rally as a navigator happen at the ripe old age of 16,and the first as a driver at the age of 17. His father did some rallying in the late 50’s/early 60’s and he got the bug. He moved to Spain permanently about 20 years ago.

His first rally was a bit of a disaster but it improved from that point on. Rallying today makes Formula 1 look tame according to Ian, and although Rallying today is faster it is also easier due to changes in rules allowing drivers to reconnoitre the routes. Making a living as a rally driver is the domain of a select few at the very top of the ladder.

Ian set up the Classic Car Club of Andalucia as working with committees in the existing Car Clubs was never quite is forte. Ian explains the difference between Classic and Vintage cars, with the latter being easier to define as a pre WWII car.

Classic cars tend to be over 25 years old, must be in first class condition, but his Club takes a less purist approach to the situation and also includes “modern Classic” which may be under 25 years, but with a design which will definitely bring them into the Classic Car category in due course.

Ian has his concerns about the future of Classic Cars as the generation of aficionados is generally getting older and the need for younger enthusiasts is important. Ian has around 20 classic Cars of which he describes himself as more of a custodian than an owner. To listen to the full interview: https://youtu.be/n5L1HlMnuoE